After replacing the fuel lines, my brother's new 318is (e30) had a heating issue and blew a plastic coolant pipe. It sat at my house for a week until we could repair it.

Unfortunately when taking it apart, I damaged his brake booster check valve. We borrowed the one from my 635, even though it was very brittle and partially cracked. It got him home the 78 miles which was great.

I ordered a new check valve (had to cross reference a new part # since the realOEM # was NLA) and new hose which came in late November. With wedding details, I hadn't had time to work on any of the cars, so the parts sat in a box and the car sat in the garage. That and the 633 turbo progress meant that the car has been sitting a bunch-- I have only driven it about 250 miles in the last 6 months! Well, last night I replaced the braided and old looking hose finally and installed the new check valve last night!

I hope to drive it this week if the snow melts.

I have been gathering parts and need to replace and repair a few things.
-I have a good Euro tank to install to finally resolve my fuel leaking issue when the tank is full. That will be a problem I will be happy to have resoled.
-exhaust manifold gaskets for the exhaust leak
-mid-section exhaust gaskets (2) to resolve the exhaust leak
-lastly, it seems the last time I drove the car, the driver's window motor stopped working. It had been very slow since I bought the car. This may be my excuse to repair the problem.

I'll move the 635 into the 2 car portion of the garage (warmer) and try to knock out these items in the coming weeks. I'll also try to get a few photos of the engine bay as it looks better without the stained, braided brake booster hose glaring outward.
http://www.Drive4Corners.com

Haha, yes. I was only out of town for about a week, but I had been saving my vacation all year for it!

A few photos of the shark in its' current environment. I haven't washed it in months, but I plan to perform the maintenance listed above, in the near future.

I figured since my old photos are inactive, I ought to use my new camera and take a couple pictures of the engine bay and single garage stall it sits in. 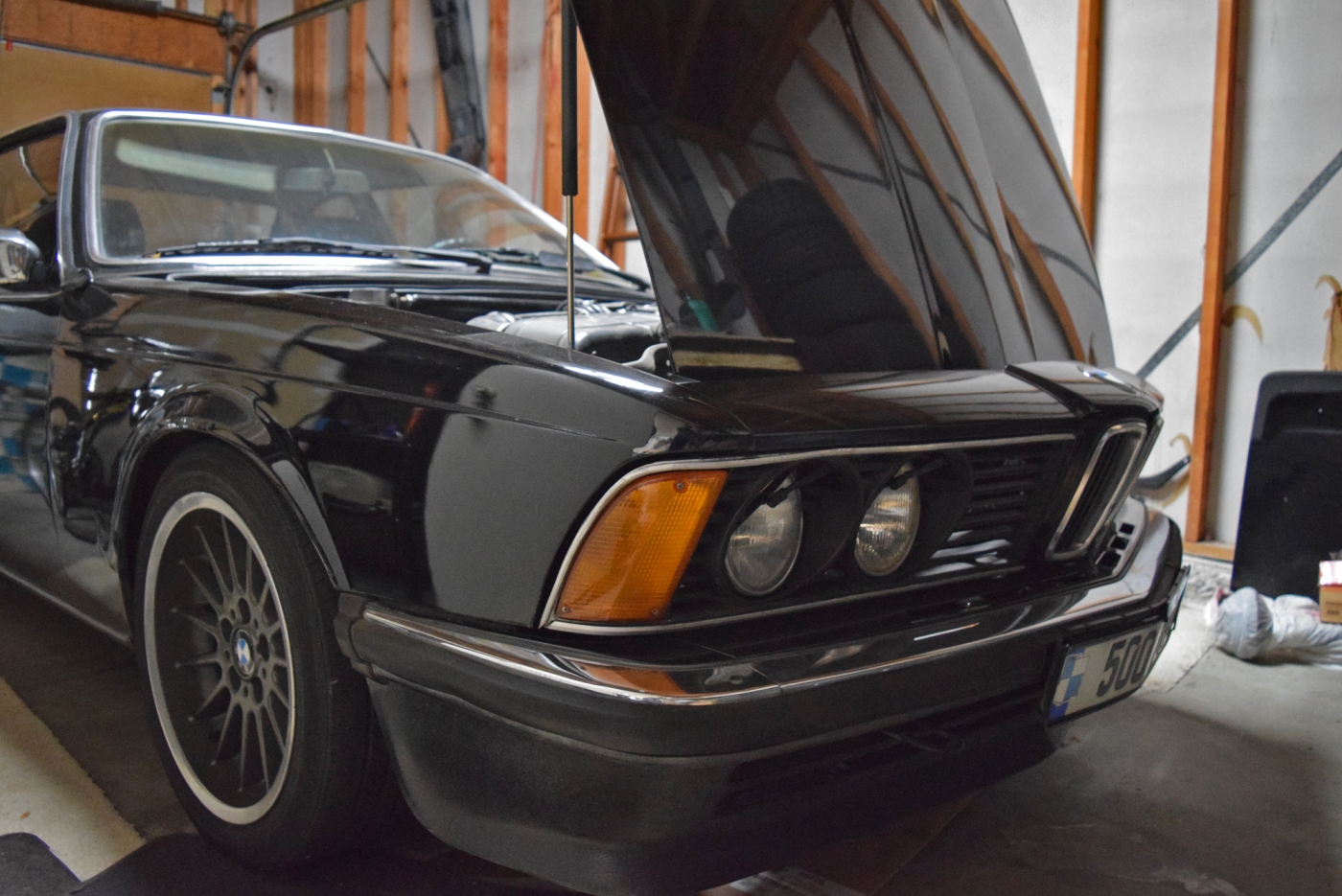 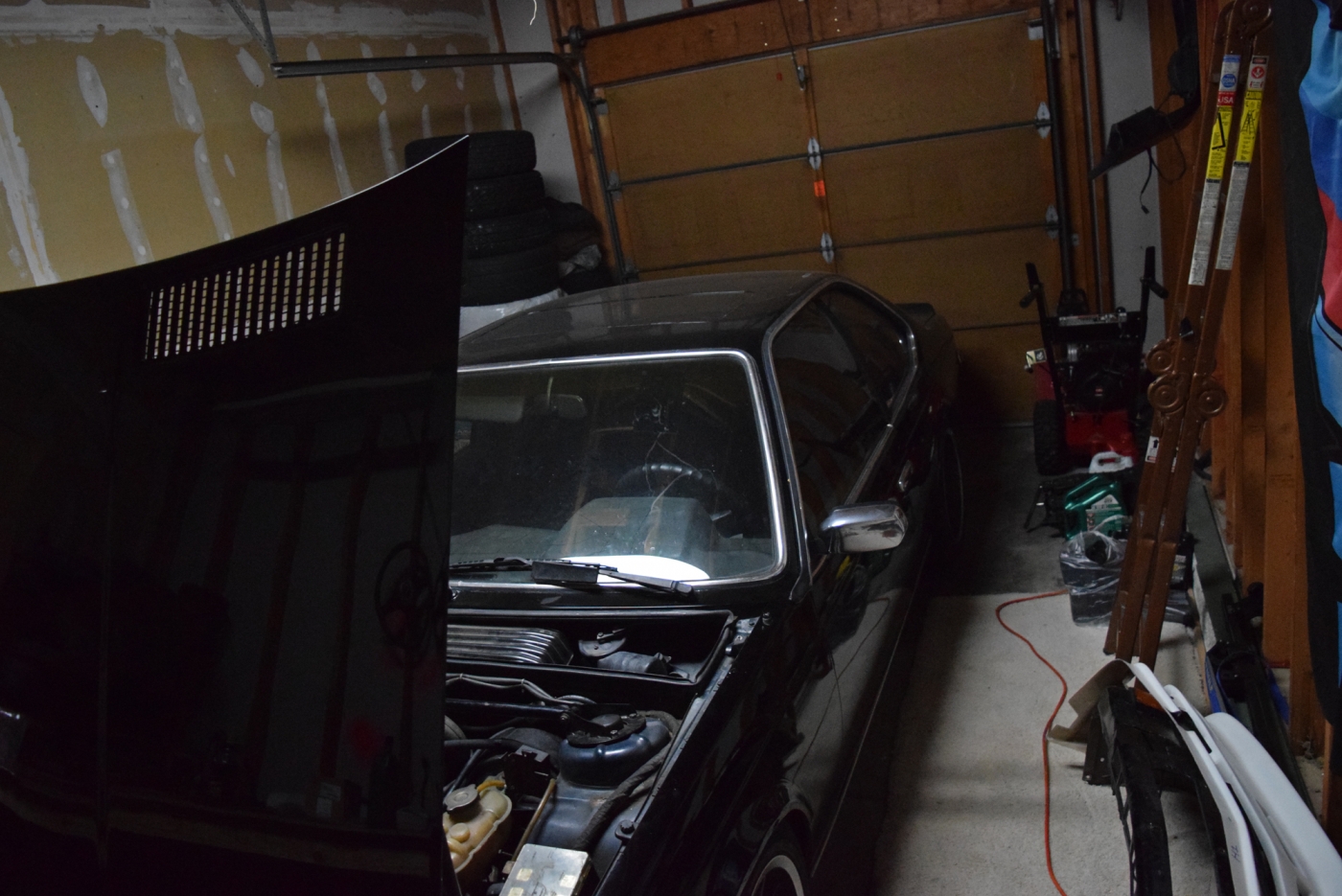 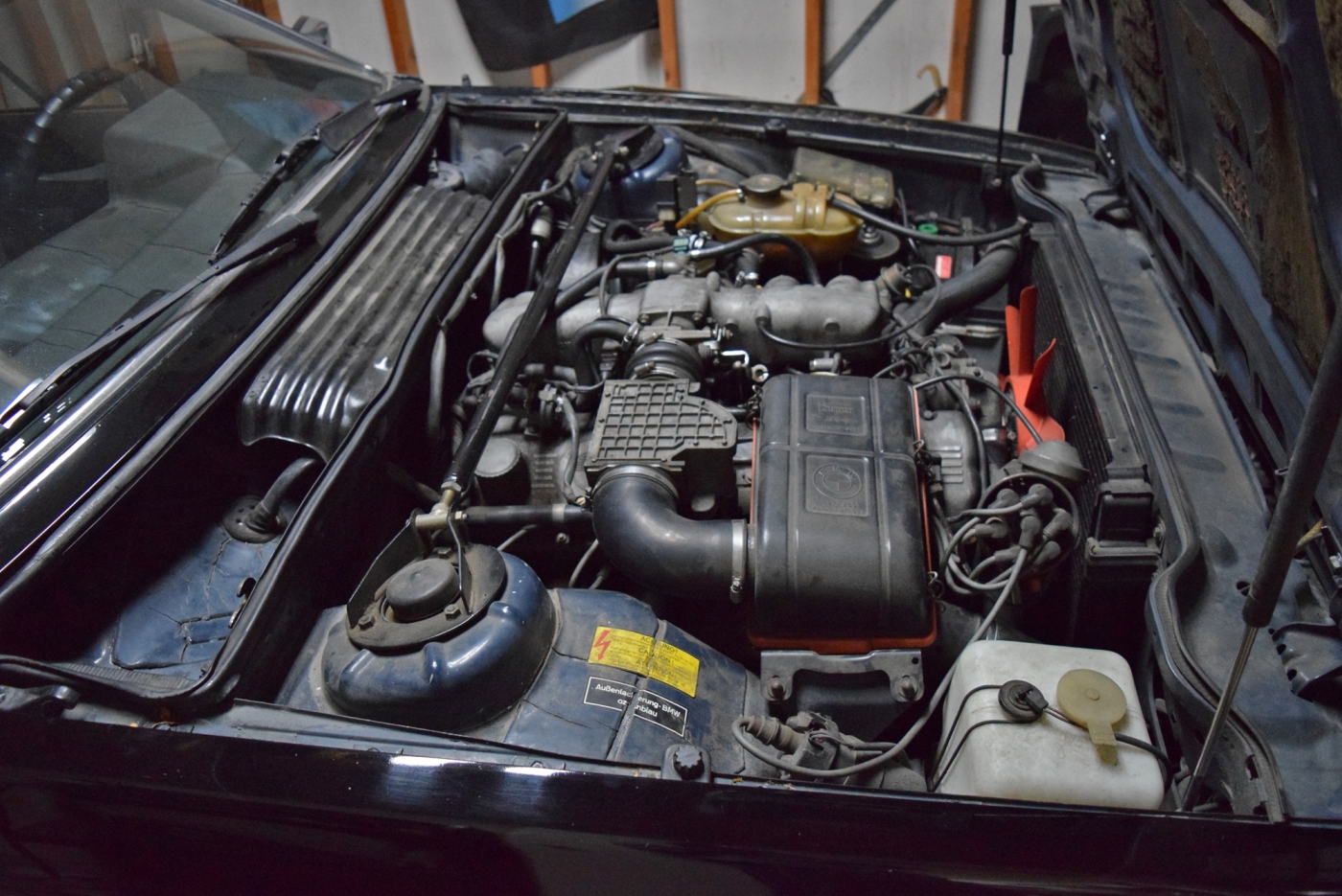 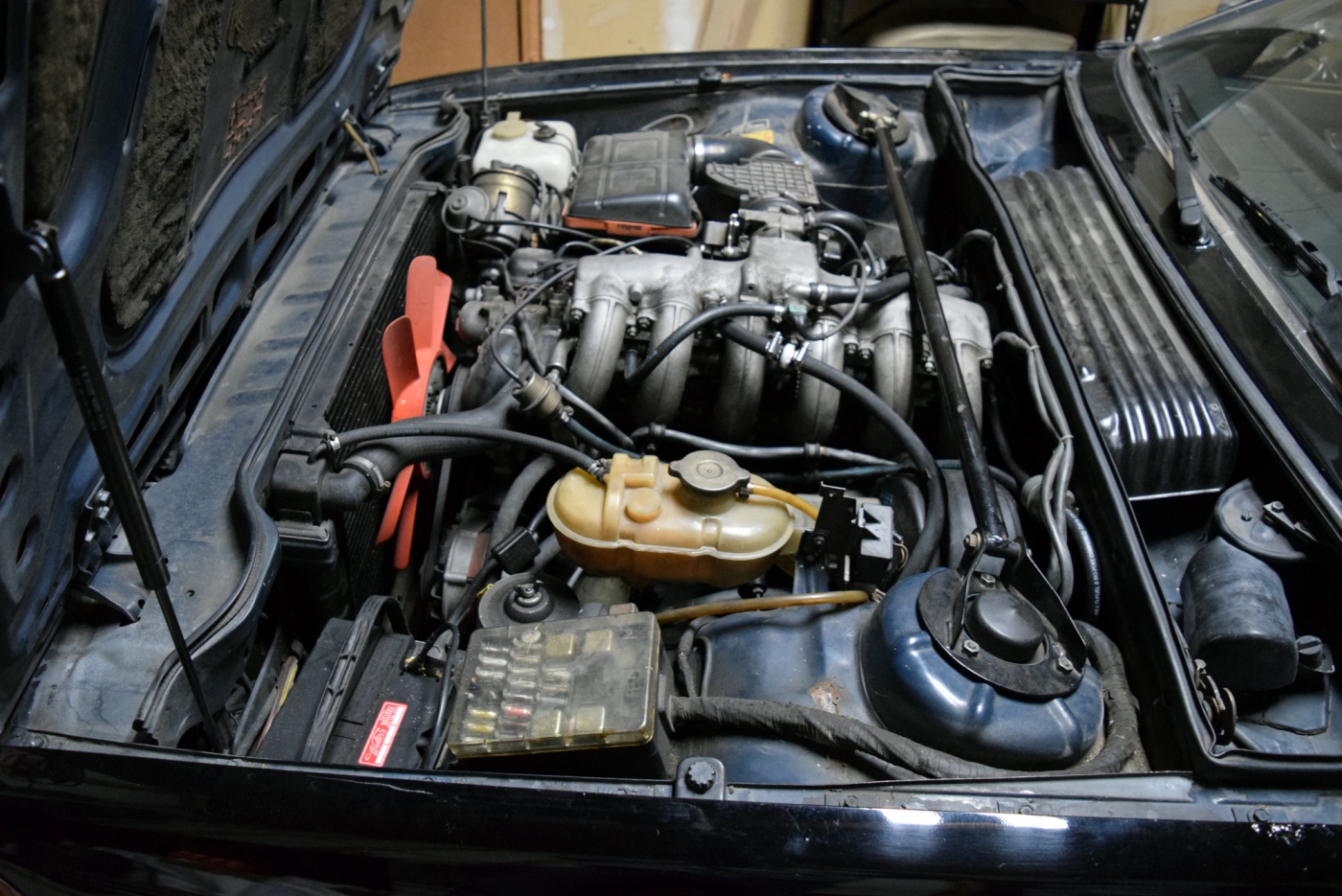 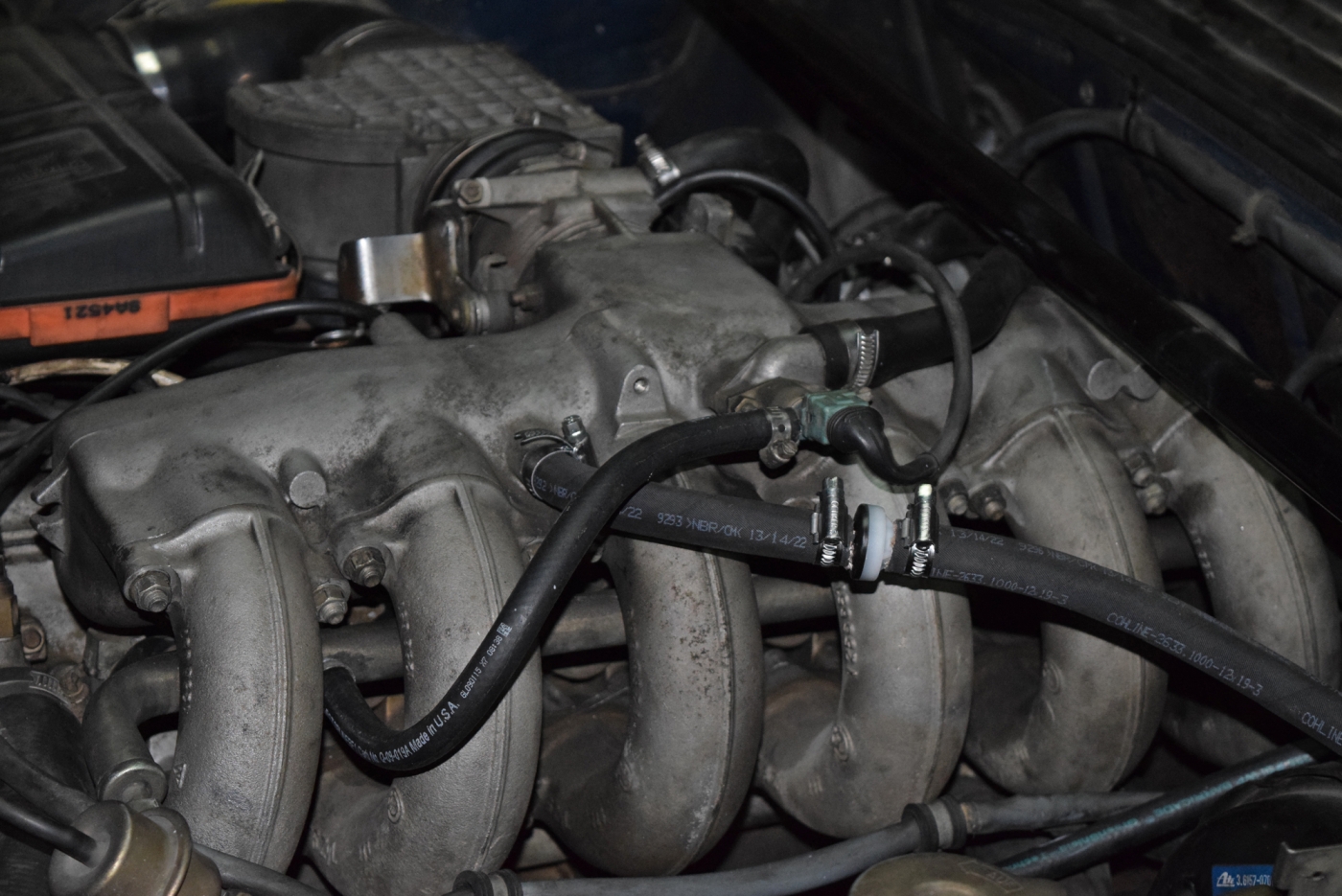 tschultz wrote:And a photo of it all back together, next to it's younger brother with euro bits and Callaway turbo:

From the factory 1978-1982 635CSi like your old car. Ocassionally they are on some later cars, but I think they would have been retrofitted.
http://www.Drive4Corners.com

tschultz wrote:Haha, yes. I was only out of town for about a week, but I had been saving my vacation all year for it!

Spasso wrote:Thanks. They are probably NLA new by now.
I'll have to keep a sharp eye out for parts cars.
There is an E12/E24 out at the airport that has been sitting for 5 years.
What a shame. There is a good set of sport seats in it I would like to snag but the guy wants too much.

So last night I was working on taking off the exhaust manifold to replace gaskets. I am having difficult removing the three nuts from the rear down pipe/manifold. I think this joint is the one with the exhaust leak so I would like to clean up the studs.

I may try some heat tonight, but I currently have it soaking in PB Blaster since last night. Hopefully that will do the trick for me...
http://www.Drive4Corners.com

When trying to crank off the manifold nuts from above, it started twisting, and the manifold separated from the downpipe.

See photos from after I separated the mating surfaces. 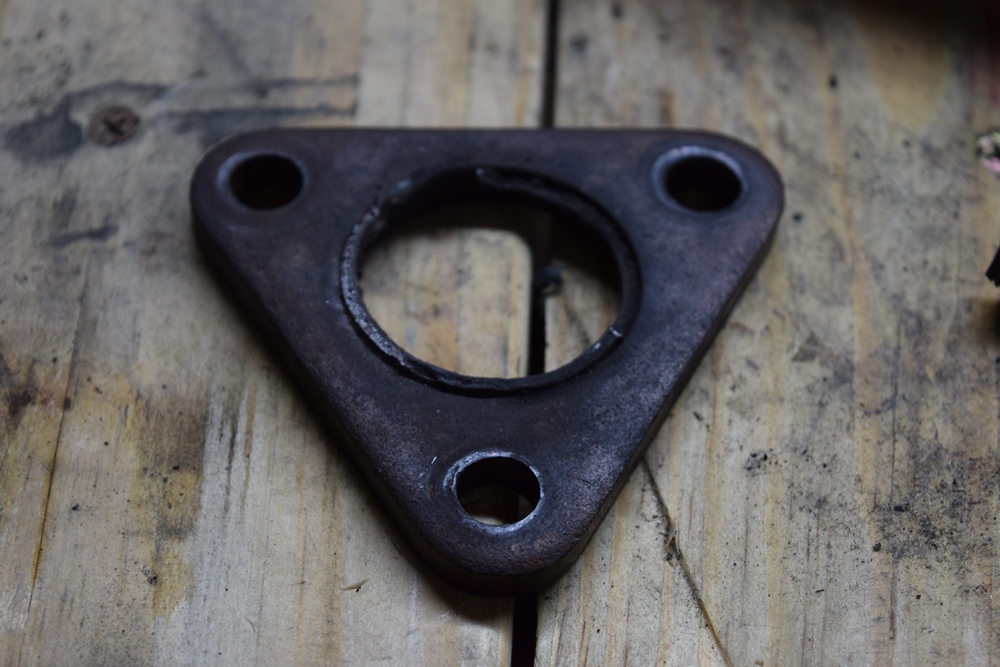 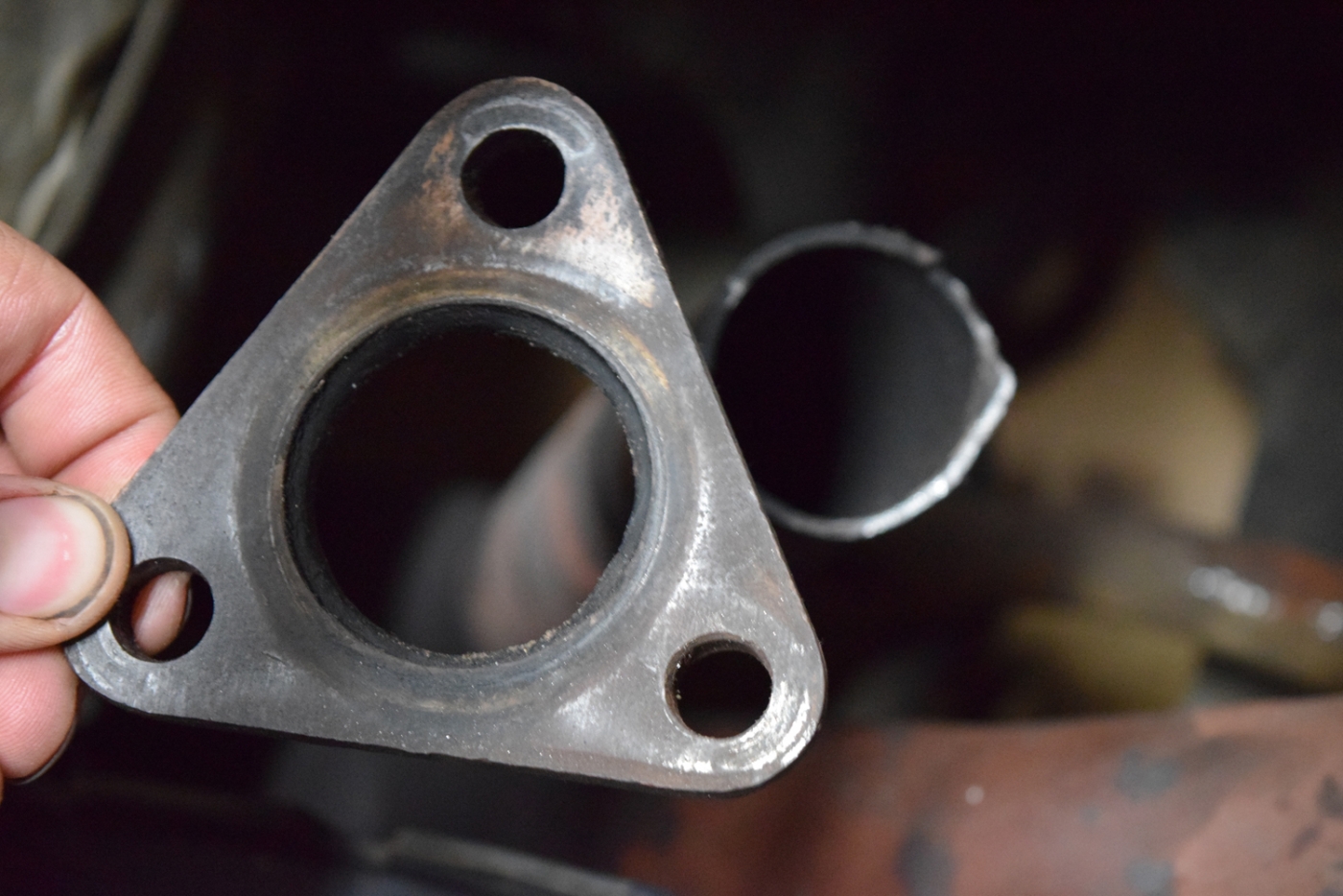 Back in place, obviously will need to be welded. 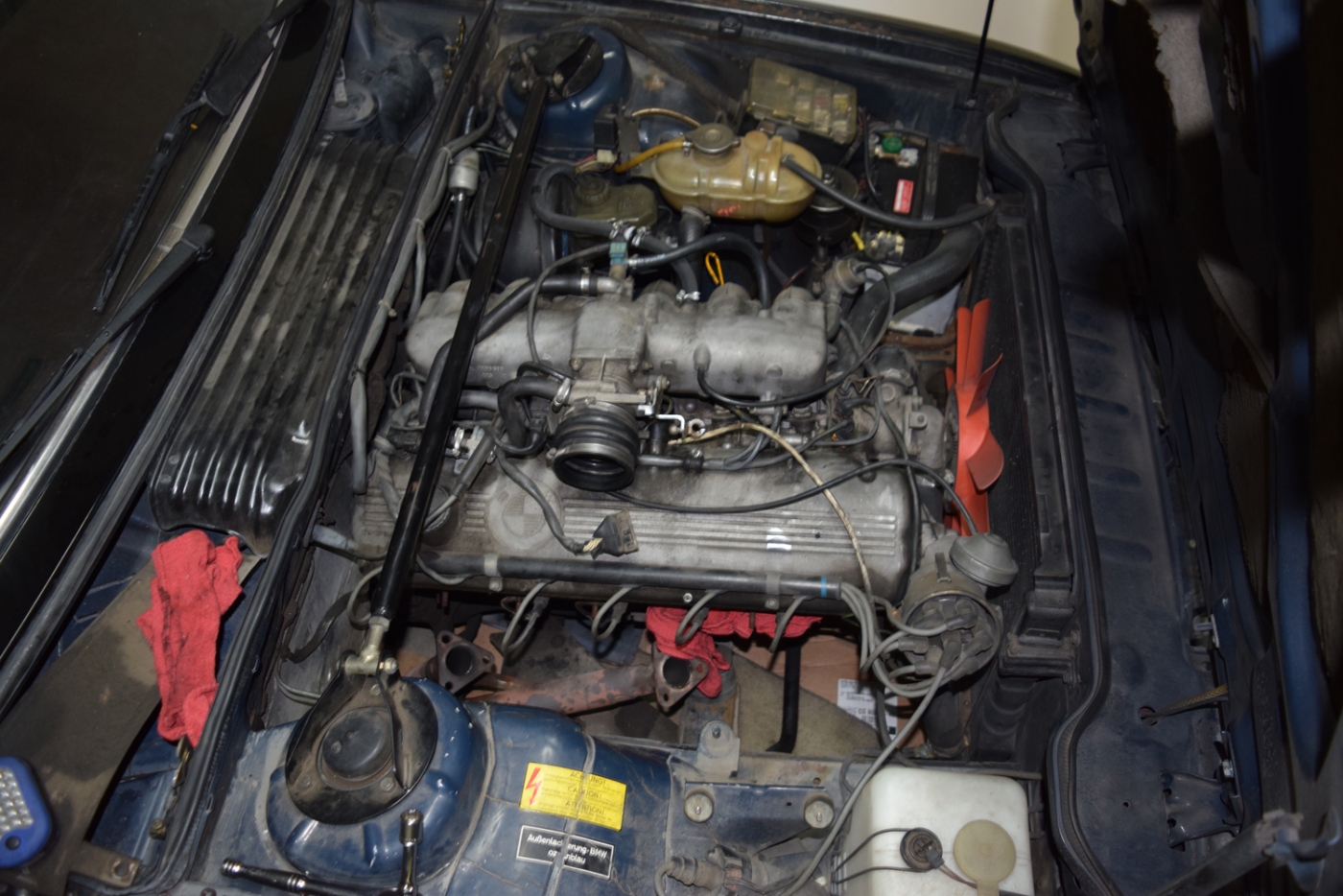 My new year's resolution was to drive this car more in 2016, I believe I only put 1200 miles on it with the acquisition of my 633 turbo. That car I drove about 3000 miles, even though it was apart for a good 6 months!

So I ended up putting the car in the garage to replace the exhaust gaskets as stated above. I ended up stumbling upon a separated flange on one of the downpipes.

Earlier this week, I was able to pull the exhaust out from under the car as a unit, and bring it to a guy down the street from me. He welded it back into position for $20 bucks. Securing it to the roof rack of my e28 took longer than it took him to weld it! I didn't get any pictures but I did get some comments, with people saying that the exhaust is supposed to go under the car, not on top.

Anyway, with the exhaust out, I was able to replace the gas tank with another 70L euro tank I got from a friend early this year. I pulled it down, and was able to swap the sending unit on it, and remove the in tank pump (it must have come from a car post -82). I also replaced the last fuel line that had the original crimped clamps. Those were a pain to get off, but now it's cheap insurance for me since I won't have to get back under there.

I did all this over the course of the last week and a half, working for an hour at a time in my garage. The space heater helped out there!

Well, I got it buttoned up last night along with an oil change, and she is running better than ever! I know the valve guide seals are bad, but I just don't do much high rev decel, and she doesn't smoke too much. I used 15W50 synthetic this time, hoping a higher weight when warm would serve the car better. I don't often drive it below 32 degrees anyway, if I can avoid it.

I got a new camera, so here's some photo goodness for you all! And no, I didn't even clean it. LAst wash was probably 2 months ago.

Here's how she looks compared to my 633 callaway. I have had a bunch of people confuse the two of them, though! The major difference is the intercooler on the turbo car, or the lack of side trim on the euro car, along with the headlight wipers. 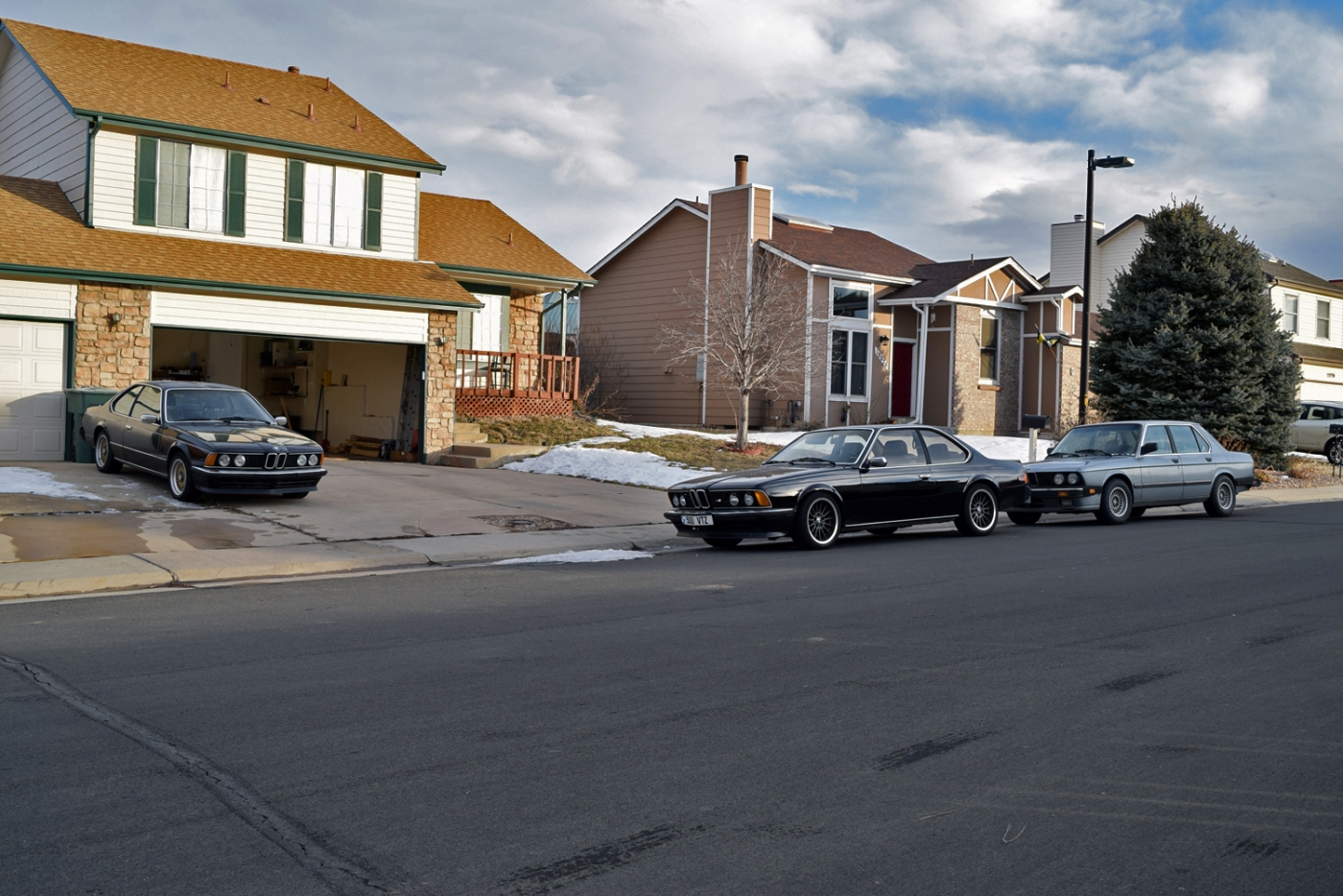 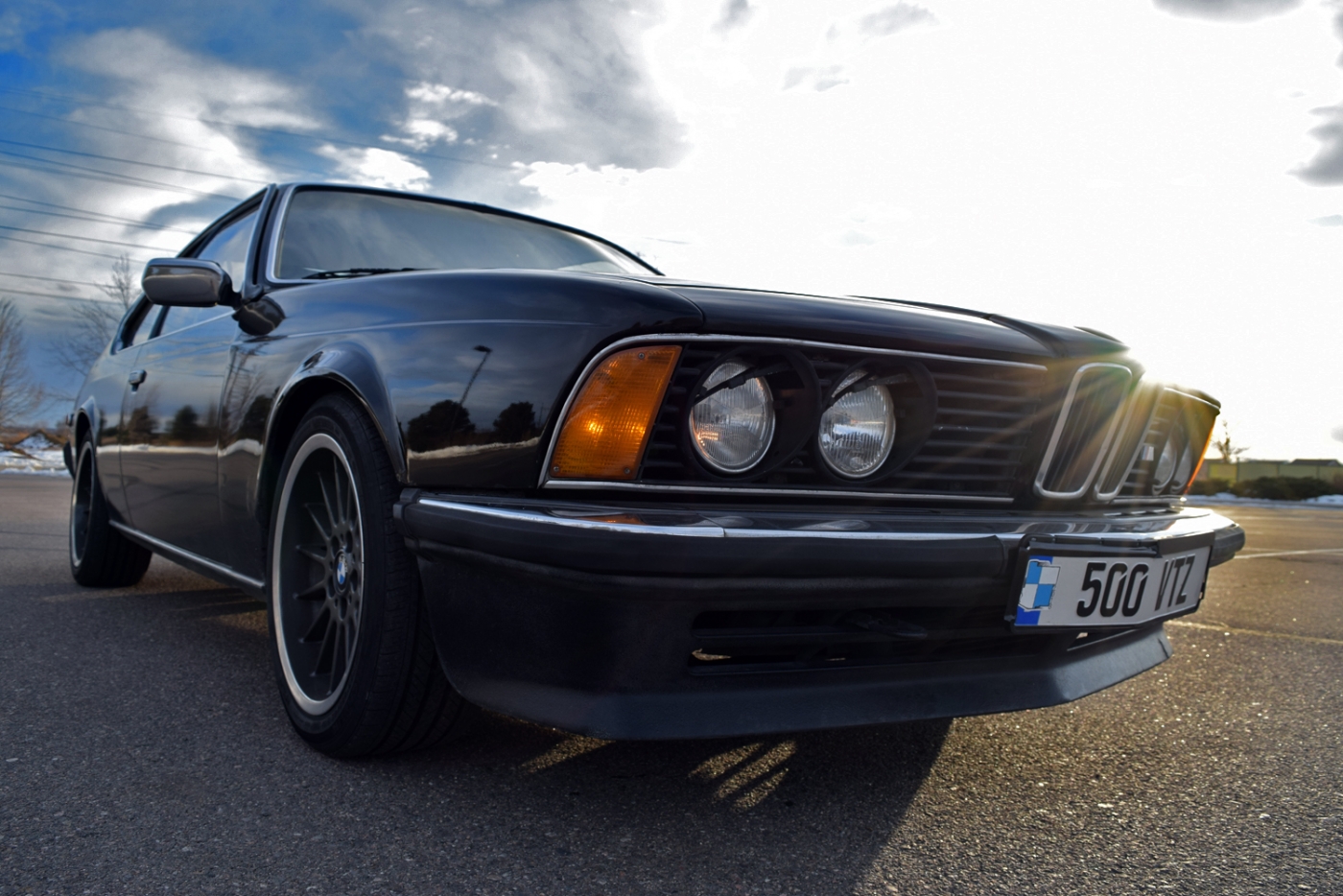 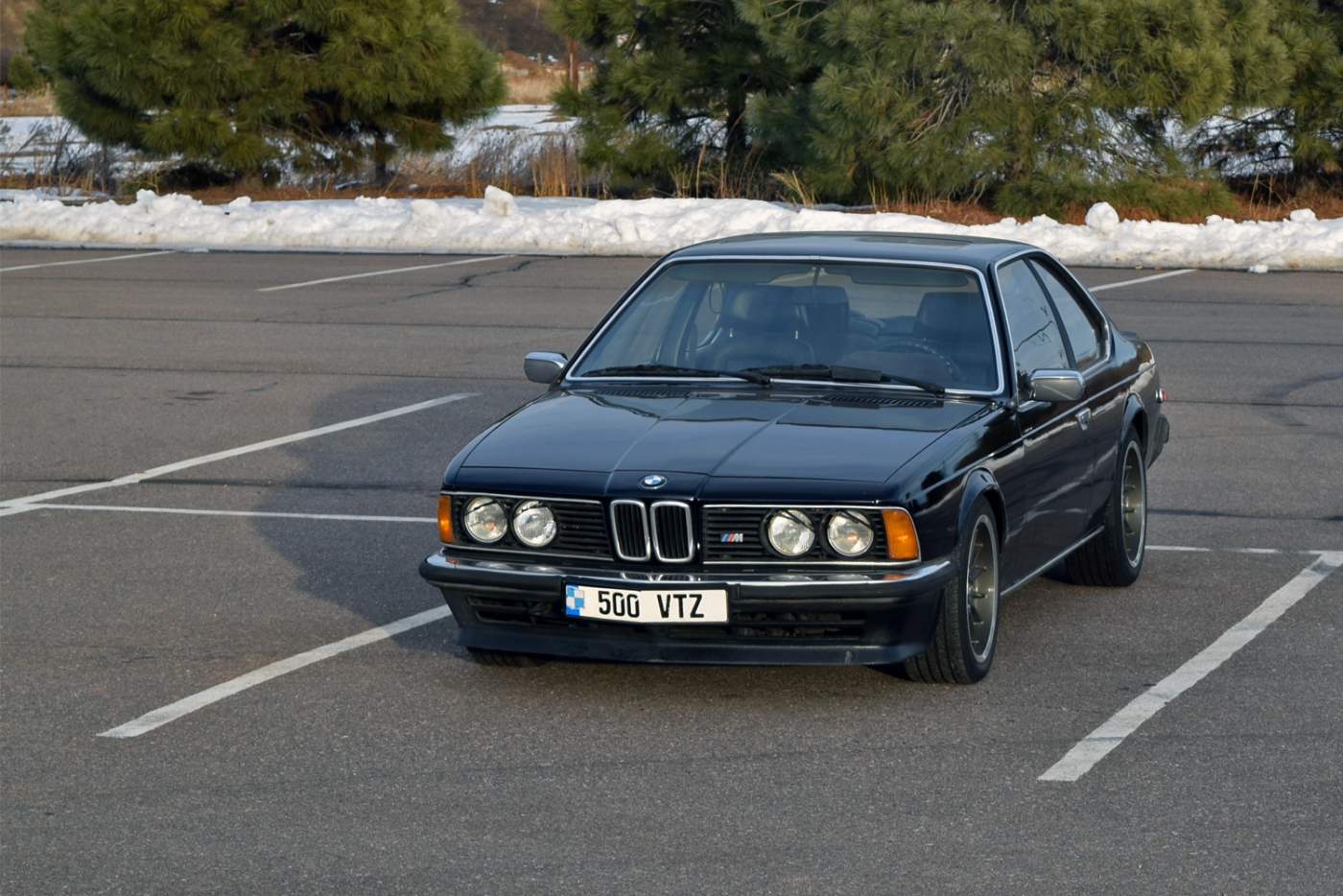 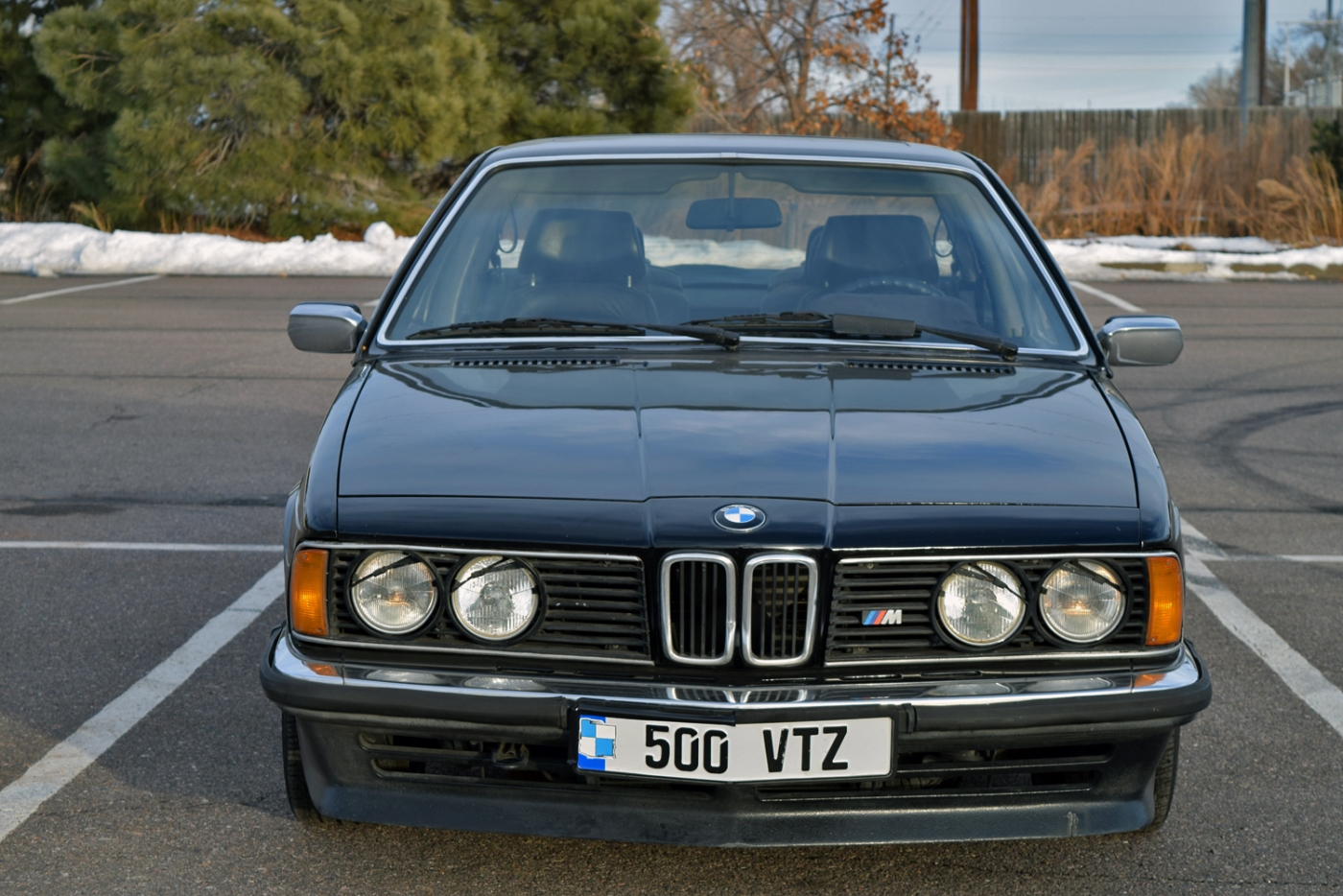 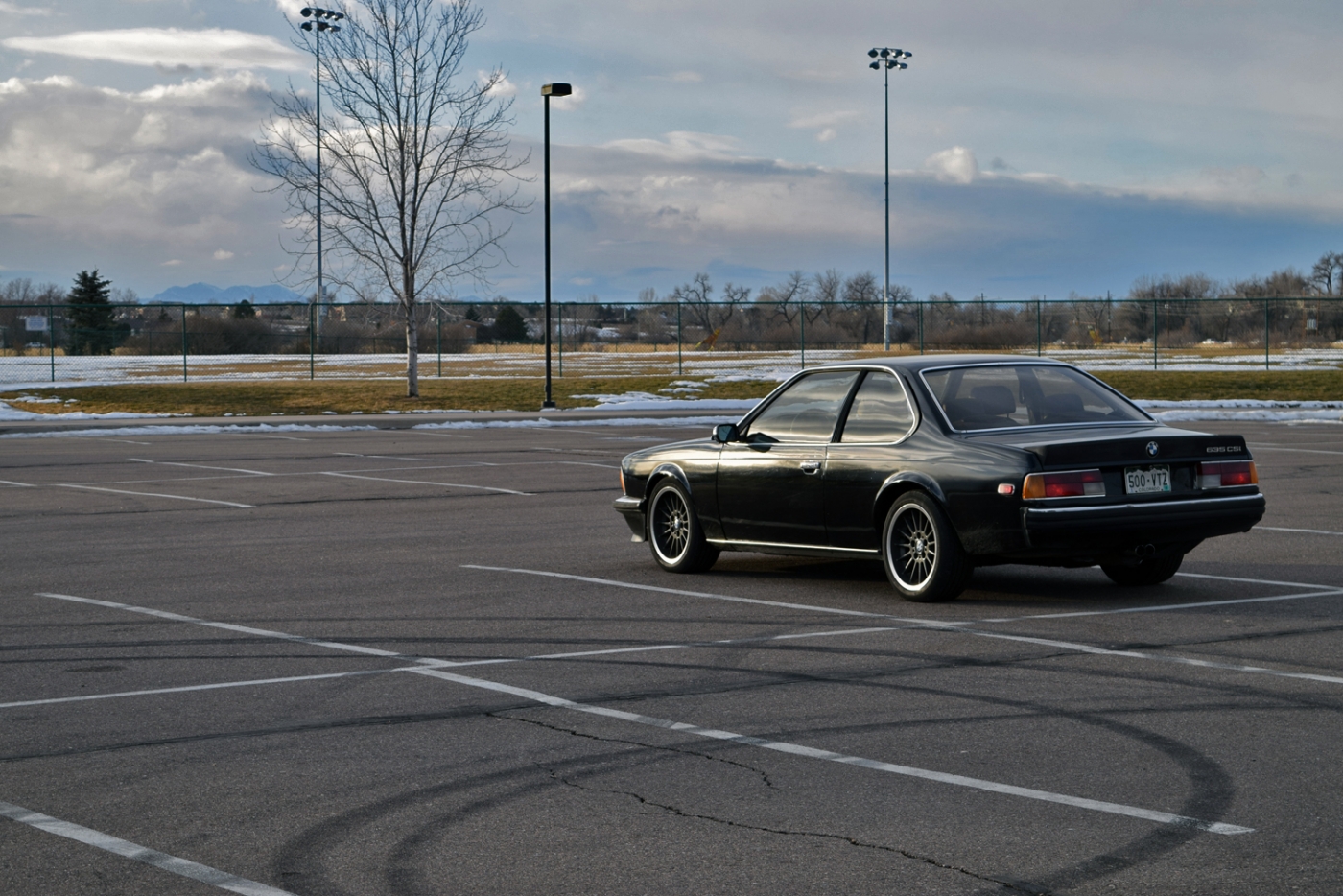 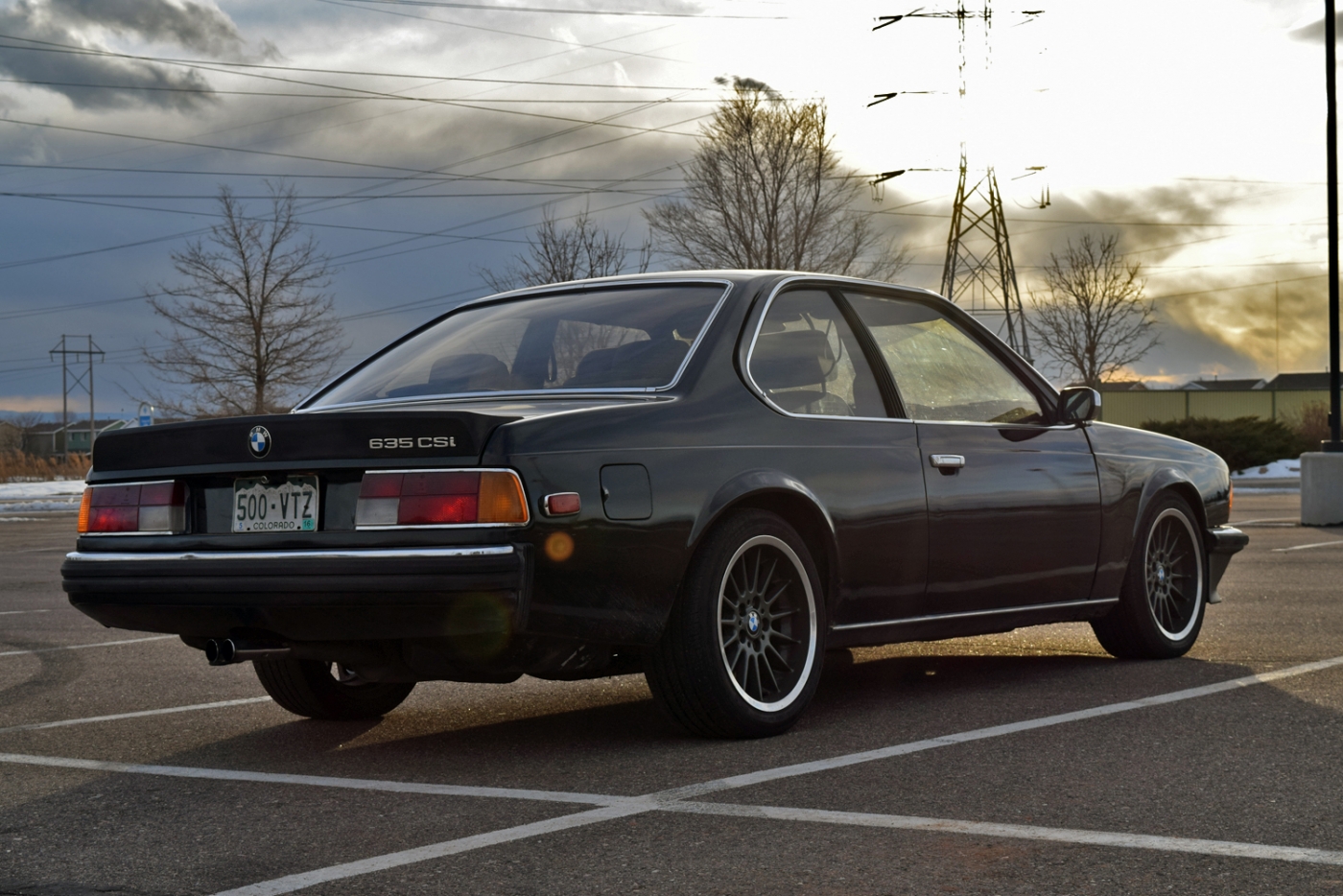 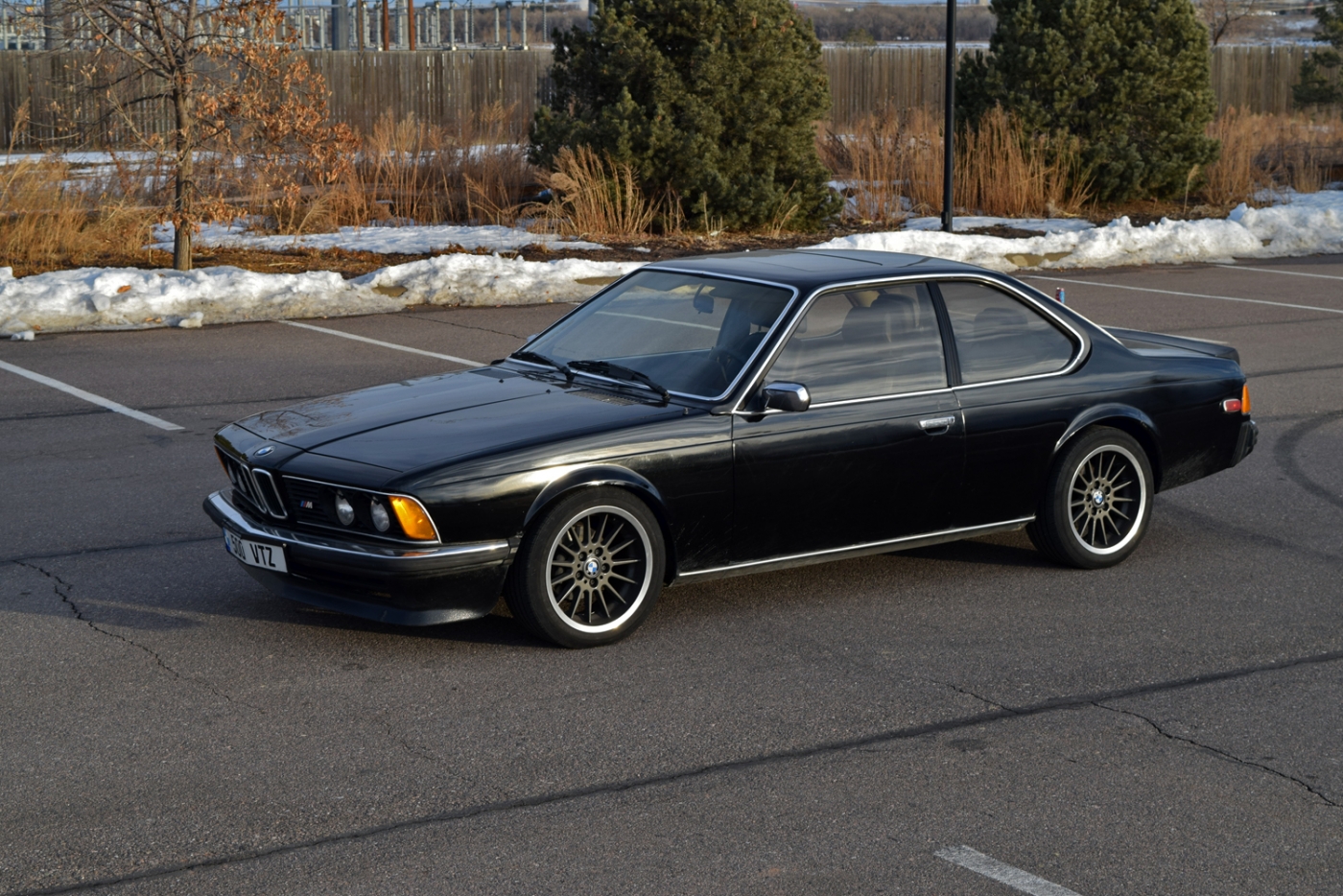 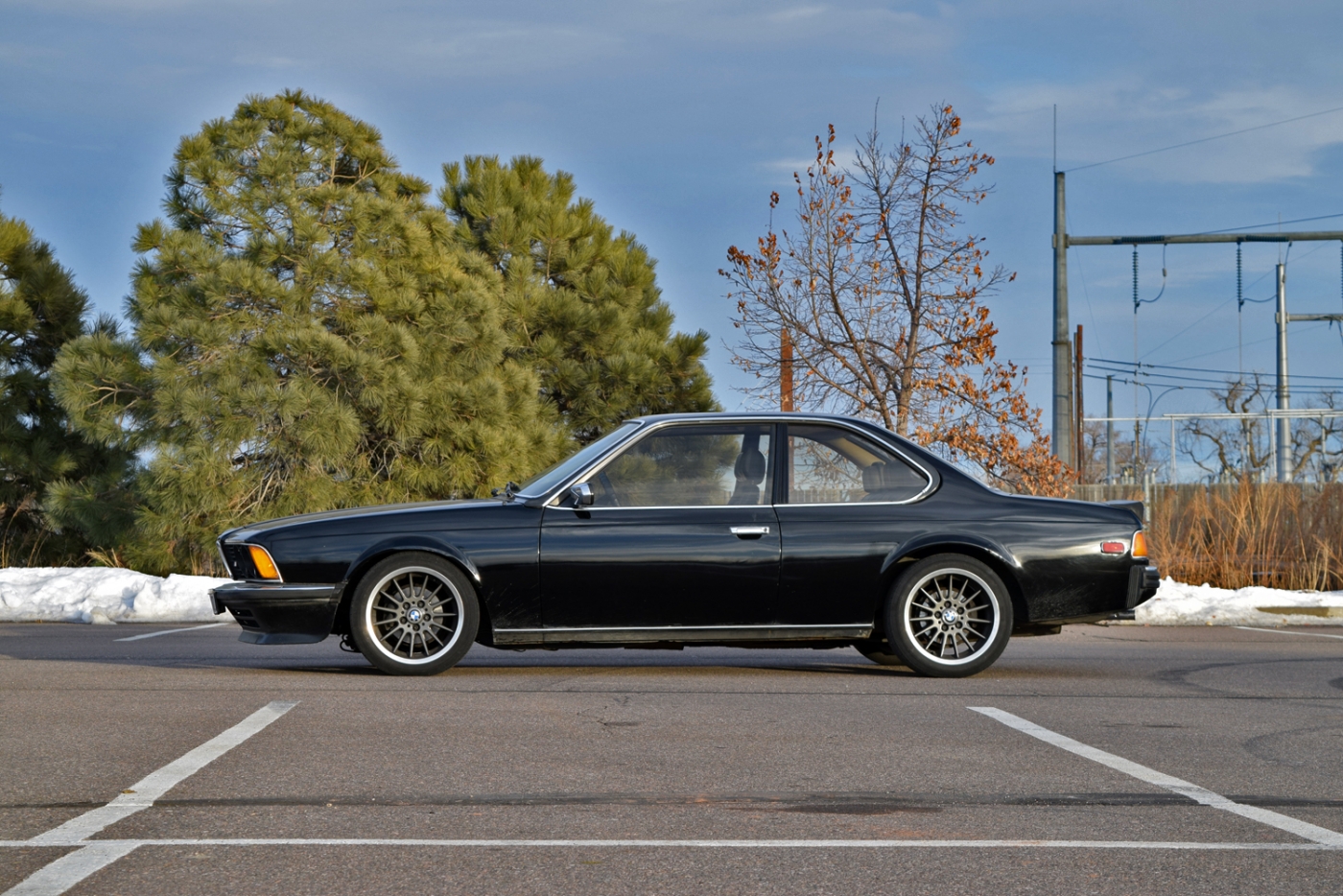 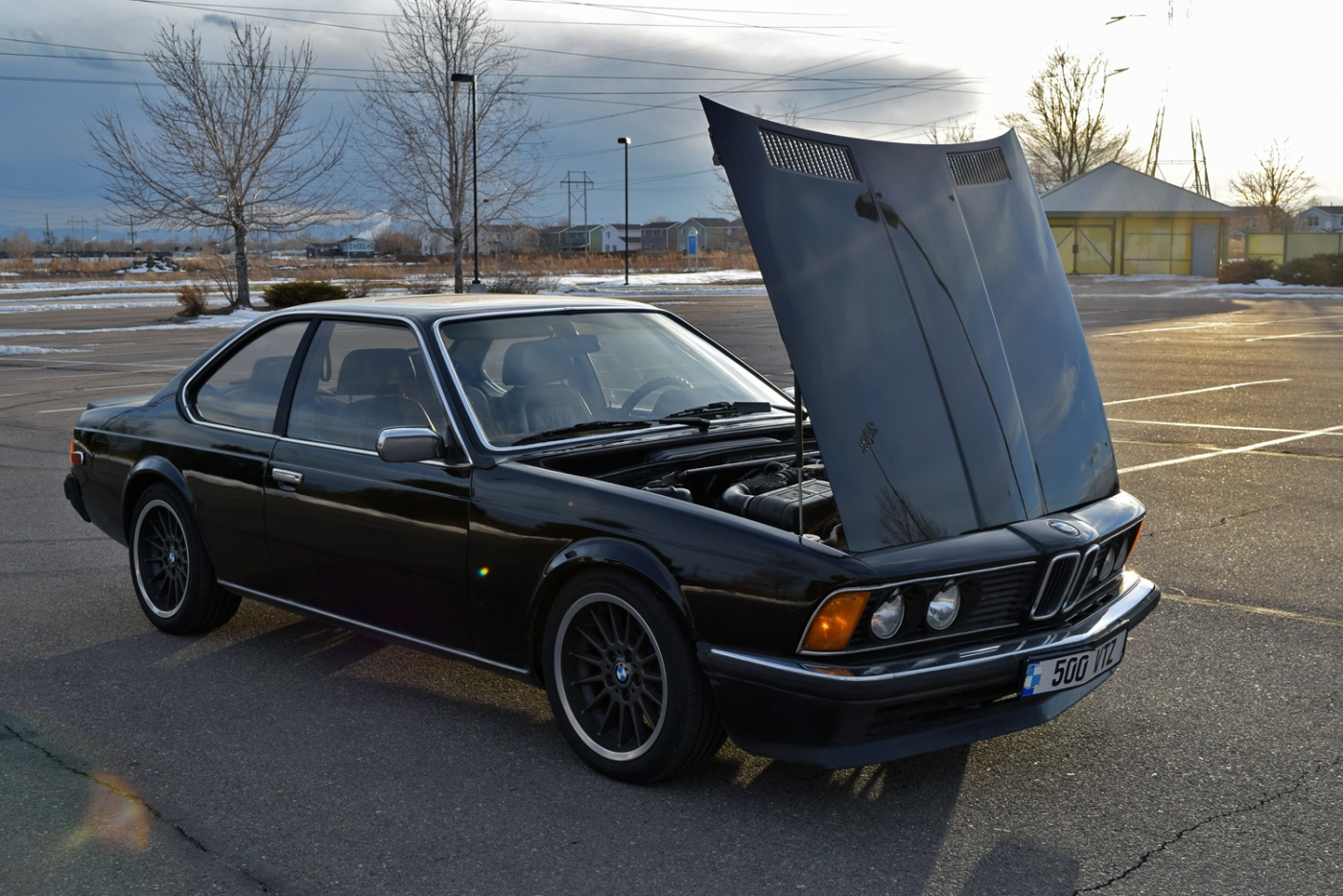 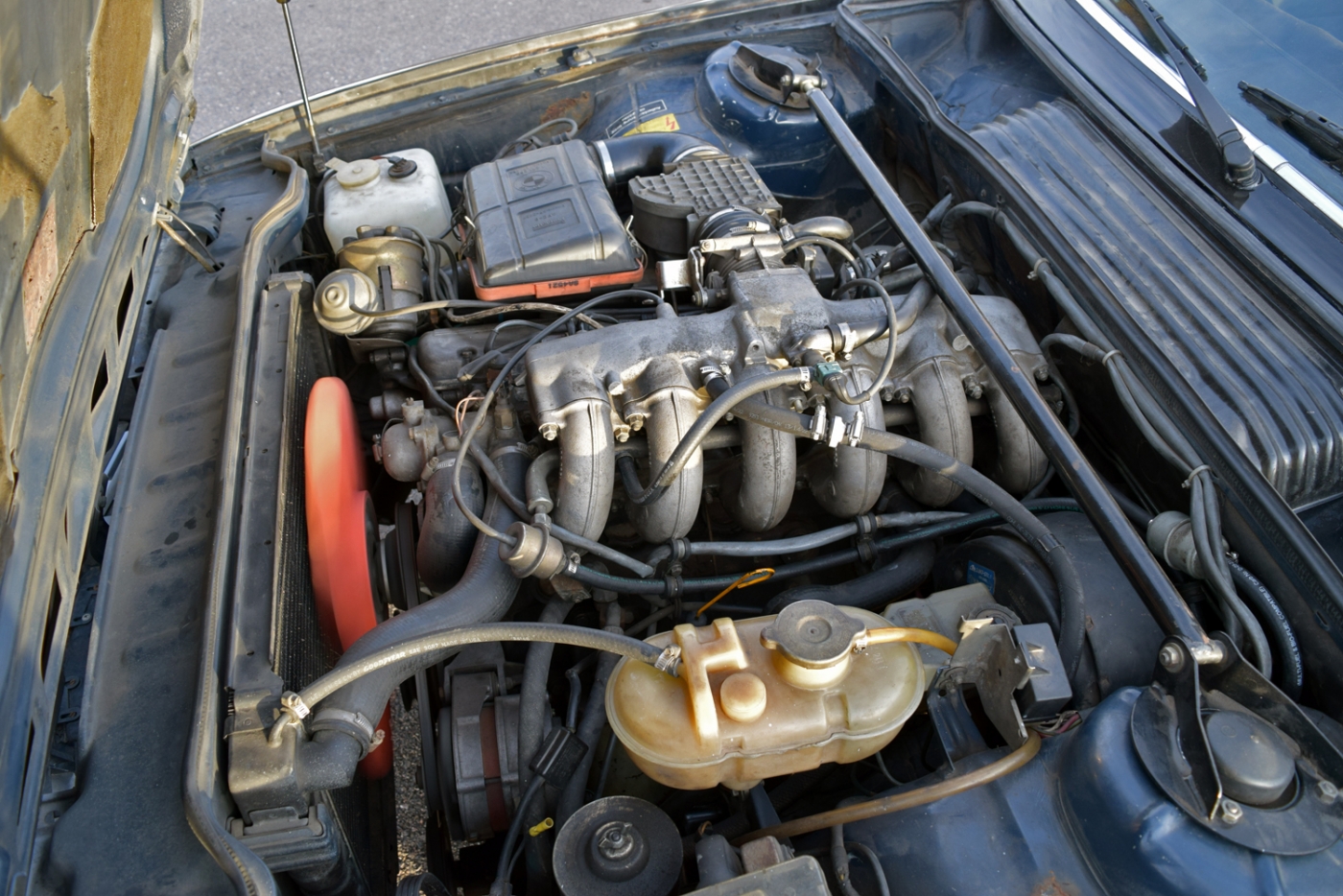 Every time I see your car I want a set of style 32 wheels. The polished lip and the painted center are perfect.
84 633csi 5 spd

captain awesome wrote:Every time I see your car I want a set of style 32 wheels. The polished lip and the painted center are perfect.

Agreed, so I just this week snatched up a second set! They may go on the turbo car temporarily with the winter tires that are already mounted...

White finish in good condition, although not finished great upon close inspection.
http://www.Drive4Corners.com

Did you do the paint and polish on those or were they bought that way? I've thought pretty hard on painting the centers of mine a dark gunmetal gray and leaving the chrome lip but just not looking forward to all the sanding of the tight spaces.
84 633csi 5 spd

I bought them this way, so I cannot speak to the wheel refinishing process. I'm sure it's rewarding, but I have always been unsure of the durability of a DIY job. I'm sure with the right process and/or materials, it would turn out great!

Driving it to work this week:


This Saturday I will be out in Georgetown once again for the ice gymkhana-- it starts real early. You should come on out!

I'll be in the 535i most likely. Ted is actually trying to set up a drive on Feb 6th or 13th down south. I can send a group email when he irons out details. Right now it is via facebook.
http://www.Drive4Corners.com

After looking back in my records, I realized I only drove this car about 1200 miles last year. That had to change, so I went about fixing the fuel leak issue and major exhaust leak so that 2016 it could be driven more. I took a drive this past weekend with the warm weather around. I had been driving the car to work and back, but that is a somewhat bland trip in comparison.

Anyway, we took to the mountains on a short jaunt Saturday afternoon. I invited my brother and a few others, and we had a good turn out.

Luckily, the weather was good, and the roads were mostly all clear. No tourist traffic in February :)
The 635 did great!

hi,
My 80 euro 635csi had it's front turn signal lenses broken and I could only find the newer winged version. If anyone knows where I can get the original as seen in these pictures, please contact me. email [email protected]
80euro Csi
Top

80euro Csi wrote:hi,
My 80 euro 635csi had it's front turn signal lenses broken and I could only find the newer winged version. If anyone knows where I can get the original as seen in these pictures, please contact me. email [email protected]

Took the car for another mountain drive on Sunday along the Peak to Peak Highway here in CO:

Just read through all your posts and pics. Nice fleet you have. Must be amazing to have all that euro goodness. Love the headlight wipers. Best pic is the one with your wife!

It is a car I really enjoy but I am working through an exhaust leak that I can't figure out. Smells in the cabin.

That combined without AC means she doesn't always enjoy this car.
http://www.Drive4Corners.com

Users browsing this forum: No registered users and 12 guests