Hello guys,
Decided to join this forum as almost one year ago I bought an E24 and I found this forum really helpful.
In March I bought BMW 635csi e24 which was produced in July 1983. This car was original purchased in Germany, later went to Bosnia and short after a while it came to Slovenia. This car was registered until year 2002, after that it was unregistered and no one drove with it.
At the moment the clock is showing almost 240.000km.
When I bought it last year in March the car turned on but sadly it was not possible to drive as breaks weren't working. So I still didn't drive it

The car have a lot of extra options, including Recaro sport seats and front light wipers. Previous owner cuted springs so the car was much lower and had good stance. There were also some other bad things done to it but on the outside and inside it looked good deal. Sadly it came without any history. It is accident free car. It have some rust which is repairing at the moment,...
I'l post some photos of where I'm right now

Those are photos how I picked up the car

First day in my garage

First some major parts came because we thought this will be enough lol..

So we start working on the engine

Before and after seats

We opened engine to see if there are some problems inside. Luckily everything looked fine

Sometime later I got back seats. They looked really good

And wheels came back from refurbishing. Also now the front is 8J wide and rear 9J wide!

Later we decided to throw out everything inside

Those were refurbished with new HR lowering springs, but later also replaced for BC racing coilovers

Some more new parts in the garage

On the engine there was replace everything. Every single screw, chain, everything around chain,..

Bigger chassis parts were power blasted and painted in black. Looks like new

And this is how clean engine bay looks like

New oil in differential and gearbox

Those were refurbished as well

The engine coming along nicely

I know engine cover is not in proper colour, will be fixed later

Tacho was not working so I was on it. In the mean time I ordered M635csi tacho parts

We found some holes on the bottom

Then I start working on front lights with wiper mechanism

were replaced for those

And a lot of parts went for a good polish

And some other darker parts too

New leather for the trunk

Found out why seats were not working properly

And replaced all the caps for the new green ones

Rear seats and panels were proper cleaned too

Then there was some surface rust here. Those parts were also blasted and powder painted freshly

This was also poor

There is also some surface rust on the seat rails. So I'm repairing this by hand

New frehs stuff as it was blown.

Today the car is in body shop for a rust repair

And got some old stock of those frames. Mine were cracked

Here we are now. The car will be in body shop for rust repair for at least 14 days from now. Then we will start putting it together
Tbc

All I can say is WOW.

Thanks guys!
Early this week I sourced whole electricity for the car.
Came like this

I'd be doing a careful visual inspection and point to point continuity checks on that lot rs6 !

You're doing a tremendous job going through the whole car, very thorough. Will be superb when you're done - keep up the good work.
'85 635csi JPS (RA2-66)
Top

Those will be only to put on what is missing on mine. There was some cuts and modifications made. Plus when I checked all the cables there were Aircon wires, cruise control cables and a few unknown at the moment. So I can add some extra stuff in it :)


Thank you. Yes, I hope at the end the car will work as this is my first project

Thank you..
There was some progress last week

The last interior parts were refurbished

My car don't have air con but I have almost whole installation now. However I found brand new compressor for 150eur so I snapped it

I found also those for back seats. Mine don't have them so it will be nice upgrade

The first goodie arrived :)
M635 cluster which is calibrated and fixed (also matching kilometers to my old one)

And got back yesterday my car from a rust repair. Now it is total rust free shell

New isolation is going in :)

I found this in my local shop for boat equipment. This screw is special and this was the only option
Top

I will visit next week this shpo and I will check. I throw all the bags to the bin
Top

I wasn't in the shop yet. Will go next week 100% as I need some new screws for my shark
However Antenna were rebuild and it's working like a charm now

Isolation is now done. Luckily there is going carpet over that haha. I added some more than there was originally. Also in the doors and panels.

Today we managed to finish the engine so we can put it back in the car. Hope tomorrow

and new oil cooler (Mine car came without it. Not sure what the benefit is but ok)

I changed all the keys and locks

and replaced front and rear badge for the new ones

However the engine is now in

Because my bodyshop lost my radiator I had to buy everything new including plastic panel- screws..

Then I finished taping all cables inside

Bought all new locks with keys. Originally I only got one key. So better safe than sorry.
Also in the factory someone assemble the lock wrong

I started putting things together

So we finished cooling

All other interior parts were refurbished and refreshed

BC racing going in

Got some new tanks to put them in

And front BC's were done to

BCs are in and right high is now finished

Really interested to know how the coilovers work, what the ride quality is like. That spoiler looks very low
'85 635csi JPS (RA2-66)
Top

We went to check this car together when he bought it. According to the fact that this is his first project, it's going really well. Keep up the good work, boy... can't wait to be finished

Thanks guys for replay :)
Yes, I also can't wait to see how this will drive. Front lip is low but as this is not my daily it might be ok.

I got new parts for the trunk, mine were worn so decided to get new ones

got some new caps

And this is how it looks like outside garage

And pedal box with some other parts which went to trash as I bought new ones.

The carpet was properly cleaned. It looks good for 36 years

Finally I finished heater box. Replaced the cooler for a new one, also transmitter is new plus I put new isolation. It's not original as it's not possible to get new one but it feels the same

Some parts for manual swap got blasted and painted in black

And also started putting together the manual swap parts.

Absolutely amazing!! Very inspiring. This car is going to be awesome.
Top

THank you :) Yup it will be and can't wait to drive it

The previous gearbox was without holes for pulse sensors, the idea was to make them but then I found "dog leg" gearbox and brought it home. I really wanted it from the beginning but I couldn't find any 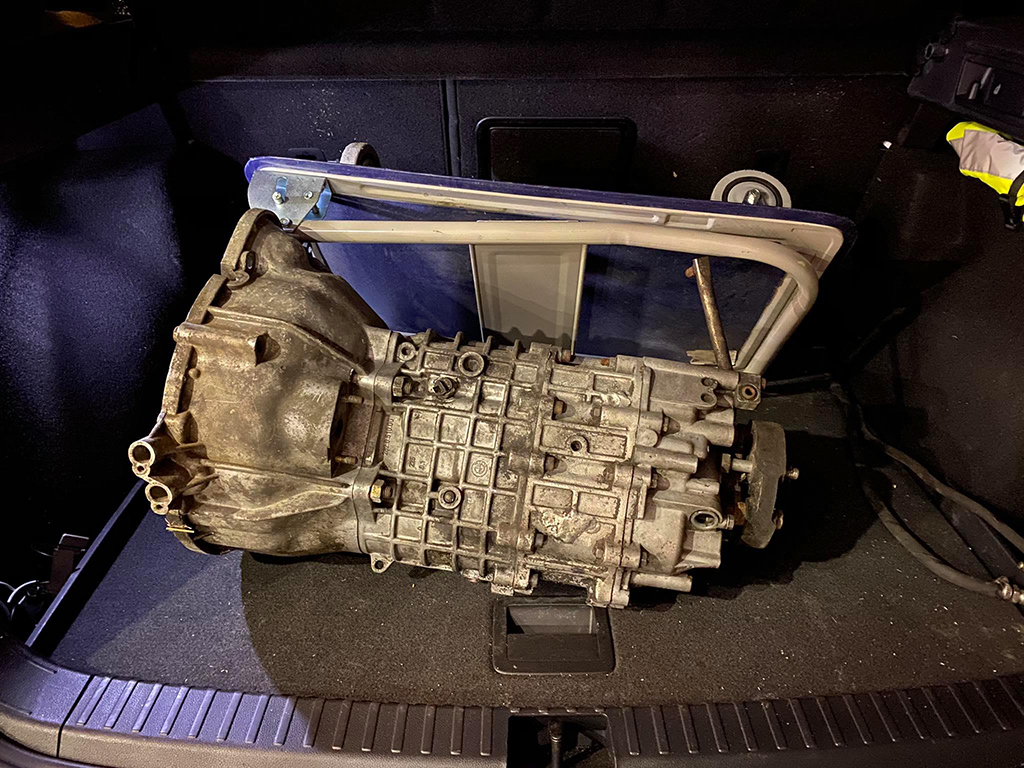 The engine is almost done, I replaced every pipes possible 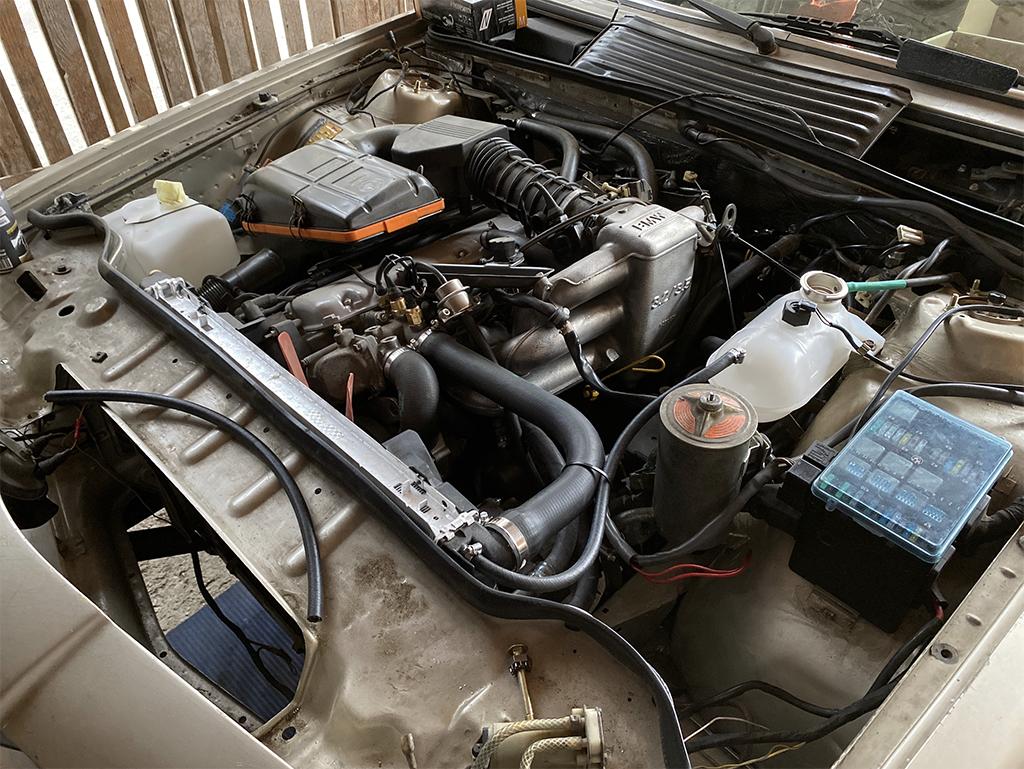 and also added oil cooler as this car didn't had it 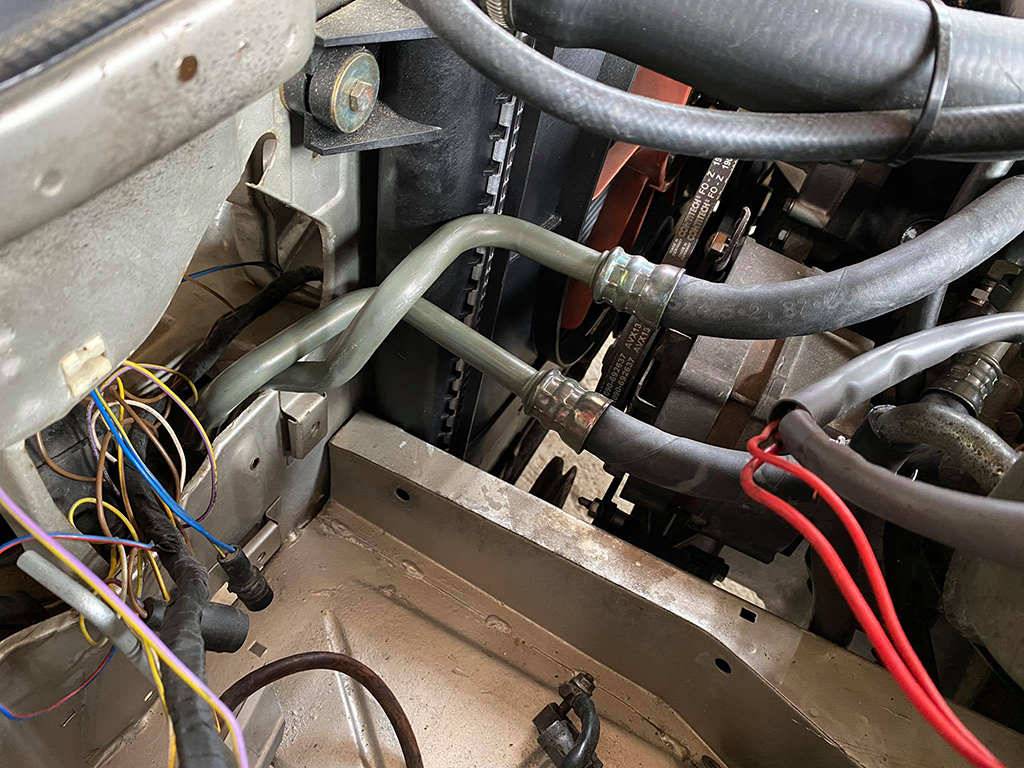 Now I have to find new parts for mounting dog leg transmission :)
Top

Inspiring indeed, that is some serious dedication and work

I would like to hear more about how you refinished the interior, just cleaning or redyeing

Looking forward to the finished product

Really, are they ever finished