Post in this forum for topics relating to the exterior. This includes body, windows, and accessories

one of the many things that has happened recently is that I have not been able to work on my project car. This means the door has not been opened for some time. IIRC it was reluctant to close when I last closed it, too. Anyway I recently tried to open it and it was no-go; the key turns but wouldn't turn far enough to unlock the door. Unfortunately my welding set (amongst other things) is inside the car ….

I plan to open the door from the other side (which is not readily accessible, else I'd have done it already). IIRC a locked door will open if you simply pull the handle (although this may not be right if the dealock is locked...?) Past that I'm at reaching in with pieces of bent wire trying to hook the latch or something...?

I'm always up for a Brucey challenge!

So for reference there is 30cm from the swage line on the door to the top of the door bumper trim. Arm yourself with a WD40 straw and then head to the door. From the door trim find a spot about 5 or 6cm up from the trim and insert the straw with a 30 degree angle to the door at the bottom of the straw; this trick finds the angle of the rubber seal around the door and allows the straw past the seal - you should feel a 'resistance' before you feel the 'penetration'.

Insert the straw about half way then work the straw up so it is horizontal about 12cm up from the door trim, then attach a can of WD40/3-in-one oil/grease/silicon lube/concoction of your own choice - spray liberally and hope that frees off the catch that holds the door to the pin on the door frame.

My attempts to directly insert the straw at the correct 12cm height resulted in a bent straw hence the slightly convoluted method to ensure the straw passes the door seal. The 12cm height should ensure a good spray zone around the pivot point of the catch.

thanks Kevin; I shall gird my loins and have a go at it tomorrow .

update; I have squirted lube, tugged as hard as hard as I dare on the handles, and I can't get in to either door. I think if I pull any harder the handles will break.

This being a project car the battery isn't connected; one idea is to connect a battery and hope that the central locking helps out somehow. I think the locks have turned far enough and the resistance in the handles is the mechanism binding, but I suppose it is possible that this is not the case.

Anyone got any more ideas?

thanks, I shall try that. However I am slightly worried that n'er-do-wells will read this and also know how to get into E24s now... Then again maybe they know already....

A house brick. Then I can send you a free window (but postage down to you!)
Top

after much wailing and gnashing of teeth I finally managed to gain entry, without breaking anything. I would never have guessed at the correct shape rod unless I have another door internal to look at, and furthermore when used as intended, it turned out the rod changed shape, so that it needed resetting to the correct shape if it was to be used again.

The underlying fault turned out to be the crappy plastic arm on the end of the lock cylinder. This both pushes the CL switch and (when the locking system isn't powered) lifts the lock button manually. Only the thing isn't strong enough to do the latter reliably, and eventually gets to the point that the lock cylinder turns as much as it is going to turn and still won't lift the button; kismet.

I guess a metal part might be more robust, but I'm dashed if I can find the parts clearly listed on the ETK. Anyone have any good info on these items?

The two white plastic arms on the lock barrel are different to one another. The rearward one is

a) connected to the locking mechanism (including the CL actuator, which normally moves it)
b) free-turning on its mountings, and
c) only moved manually by being pushed by the other white arm

The near one is connected to the lock barrel and

d) normally allows the lower tab on the arm to work the CL switch but
e) when the battery is flat or disconnected, the arm pushes the far arm and this lifts the lock button.

The problem with the locks on this car is that the near arm is now a slack fit on the lock barrel shaft, and the lock barrel only ever moves +/- 30 degrees or so, which means that once the fit is slack, the lock barrel simply doesn't turn far enough to work the lock mechanism manually.

One of the things that was on the joint was a big daub of what looked like araldite; presumably this was a known and/or old problem, and the glue was meant to be a fix for it. Didn't work though.

I'm not 100% sure how the arm is secured to the lock barrel; IIRC there might be a metal pin through everything. If anyone knows how to take it apart (I've done one but that was sixteen years ago...

FWIW I think my red car (an 87) has a similar issue; occasionally the CL fires randomly as I'm driving along, which could be caused by a loose near arm, pushing the microswitch as you go over bumps.

Brucey when I did that job I could see no other way the white pieces were held on other than a push fit. I used a special Loctite on mine and so far so good. Definitely needs a better solution though.
1986 635csi LOCUTUS / Arktis Blau Metallic / Pearl Beige / S38B36/ Close ratio dogleg 5sp
2002 E46 M3 / Topaz Blau Metallic / Black Nappa / 6 speed SMG software tuned / Bilstein PSS10 Coilovers
Top

thanks Baders, I shall try pulling the thing off when I get the chance. However there are two notches near the centre of the near arm which look as if they are meant to do something...?

I guess I'll find out (again; my memory doesn't quite stretch back sixteen years...) how it all works. For modificatons, I feel a metal hub for the arm coming on, maybe with a screw or cross-pin to secure it properly.

I think it was quite a bit longer ago than 16 years since I was messing about with a driver's door lock (when in the process of removing the outer handle to replace the rubber gater)!

I found this picture 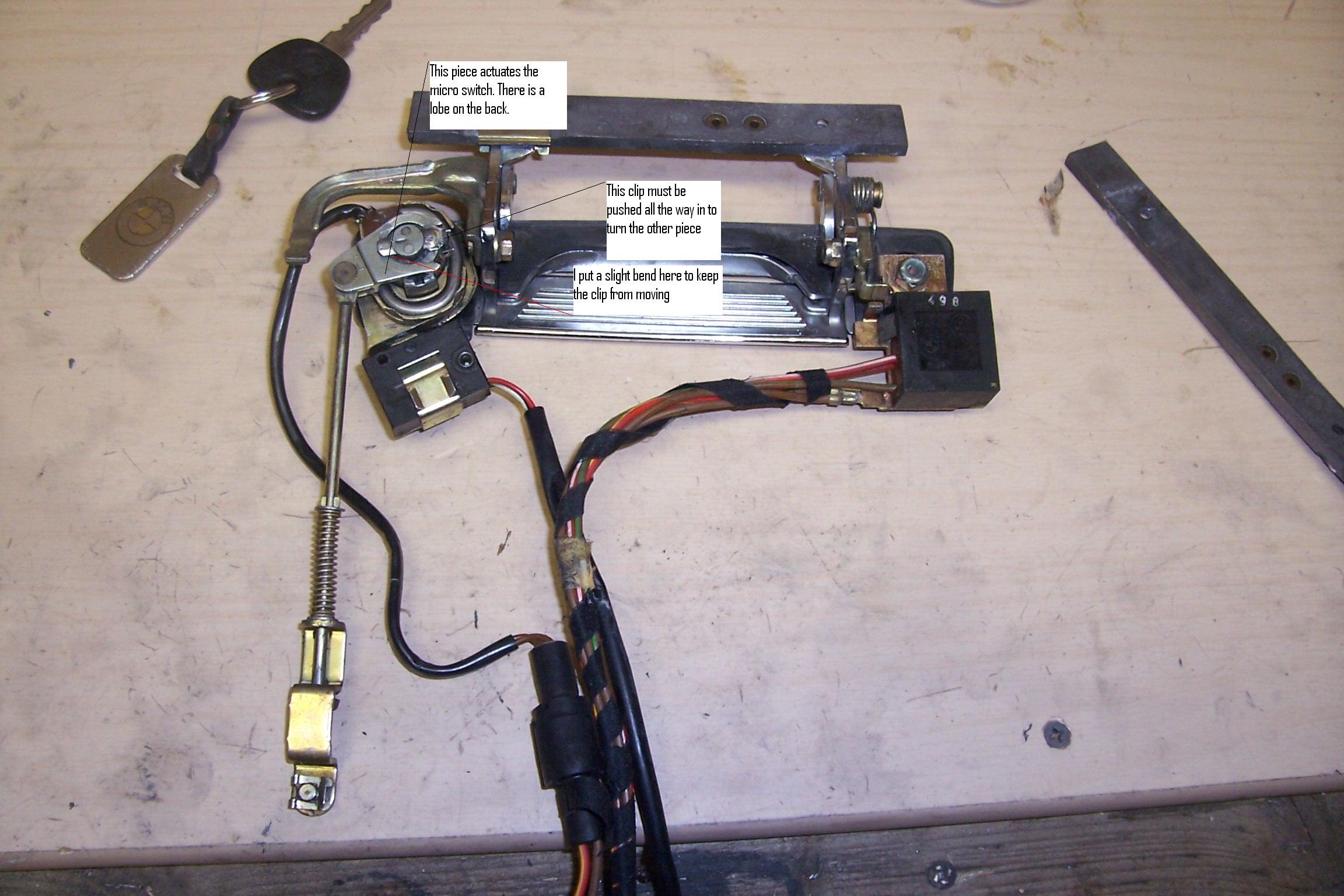 which shows an alternate (later?) version with a metal arm. However it also includes a spring-preloaded telescoping section in the locking control rod, which presumably allows the CL actuator to fire and not turn the lock cylinder at the same time.

In the ETK these design variations do not appear to be well represented, unless I have been looking at the wrong part of it.

Not sure about metal arm being later, I had the metal arm on the driver's side and plastic on passenger's - although entirely possible this was a later change...
"Most of it necessary; all of it enjoyable[!]" LJKS
'84 635CSi, dogleg fun
Top

a (possibly stupid) thought; is the lock heater etc only on the driver's door (RH door in the UK/Aus/Japan, LH door in most other places). And does that more often (or always?) come with a metal arm etc?

My dim sixteen-year old memory is that my (~4/87 build) RH/driver's door had a positive retention for the arm and that the parts were metal, like the photo of the lock heater above (but mirror image obviously). I certainly had it all in pieces because I rebuilt the lock cylinder. I just waded into the job and the abiding memory of it was that it was bloomin' fiddly, in good part because it meant working in a tight space (where you couldn't see well) with your left (less favoured in my case) hand. In fact IIRC it was so fiddly that I briefly considered taking the door off to improve access....

As I recall my RH door was also metal, and LH door was plastic pieces. I thought it was a bodge up on the LH door by a previous owner, but I might have read that wrong. Can't remember if my LH door had the lock heater but possibly it did not. Can check my photos when I get back home in a couple of days.
1986 635csi LOCUTUS / Arktis Blau Metallic / Pearl Beige / S38B36/ Close ratio dogleg 5sp
2002 E46 M3 / Topaz Blau Metallic / Black Nappa / 6 speed SMG software tuned / Bilstein PSS10 Coilovers
Top

In the latest pic posted up by Brucey (good find btw) isn't the lock heater actuated by lifting the door handle? I'm trying to explain (to myself) why there are two rectangular blocks, both with micro-switches. Is there a second heater unit of some kind?

The metal parts on the end of the lock barrel are just I remember them. In my youthful enthusiasm to remove the door handles (so I could install new outer rubber gaskets) I ended up removing the metal "spade" piece right at the end and had then had terrible trouble relocating it. Since then I've always tried to avoid using the key to open the door in case it all fell to bits internally lol
Phil
__________________________

the electrical parts on view in the photo are (I think);

Users browsing this forum: No registered users and 1 guest