Talk women (or men), politics, gripe about your 6er (or other ride), and speak your mind.

We recently picked up a 1983 BMW 745 Euro with 230k on the clock. It is not running and has not run for years, but it is in really nice condition.

It was meticulously maintained by Hardy and Beck, and we spoke to the mechanic who worked on the car. He says it is solid. However, there are $800 in CA DMV back fees on it, which we will have to pay in order to do much of anything with the car. So, we are at odds as to how to move forward. Interested in your thoughts...

A little backstory: we acquired a 1981 633 5-speed (The Shark) for $500 last year that we are building for 24 Hours of Lemons. We have autocrossed the car a few times and it runs and drives well enough that we think it might survive the race. Our first Lemons race with The Shark is next weekend at Sonoma.

So, when we were offered the 745, we thought we'd pull the M106 turbo engine and swap it into The Shark. However, when we saw the car, we thought it might be too nice to molest. It has a long list of goodies on it, starting with that M106 engine, limited slip, adjustable rear anti-roll bar, buffalo hide interior, Hardy and Beck wheels, beautiful Euro bumpers, stainless exhaust, near perfect buffalo hide interior... The list goes on. 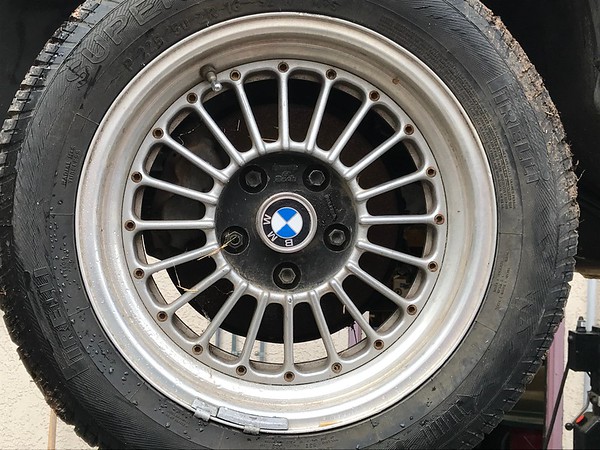 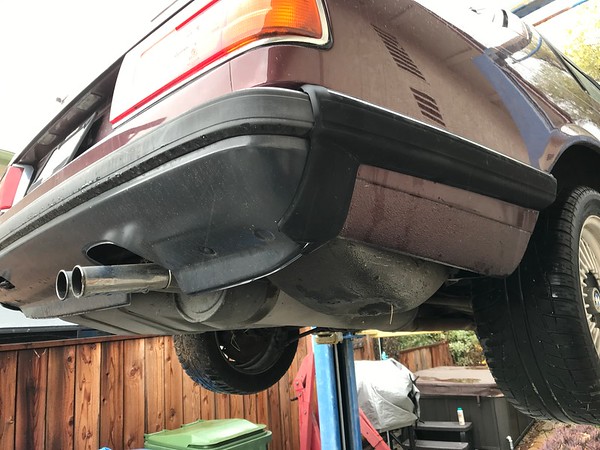 Here are our options as I see them:
Take the engine, ltd slip, and a few other bits for The Shark, and part out the car. Probably get a few thousand bucks out of it before we'd have to junk it. Of course, in order to junk it, we'd have to pay the $800 in back fees and get a clear title. But it seems like a waste to part out such a beautiful car. We would end up with some cash to put towards The Shark.

Get the car running/driving and sell it. It has some bad vacuum lines and probably needs some fuel lines, but we think we can get it running/driving pretty easily. The buffalo hide is good, but there are the usual cracks in the dash and other plastics on the doors. So, it's not perfect, but it will make somebody a very nice highway cruiser. We would use the money to fund The Shark build. I bet we'd have to put $500 into it, plus the back fees. It might sell quickly for $3500.

So, throwing this out for fun: what would you do with the car?

It is a rare car and should be restored, in my opinion.
Top


I agree. Even for lemons the turbo engine will not be reliable enough for you to be competitive, especially when the turbo or wastegate fails. The most important thing there is running reliably and making lap after lap. So I would say upgrade to M30B35 if you want more speed, otherwise keep the engine as is.

Hardy and Beck is an interesting story to go along with the car...
http://www.Drive4Corners.com

tschultz wrote: ↑
Mon Dec 02, 2019 6:48 pm
...the turbo engine will not be reliable enough for you to be competitive, especially when the turbo or wastegate fails. The most important thing there is running reliably and making lap after lap.

Our other engine option is from a 2003 330. That would make good power and be reliable.

We are planning on getting the car running and seeing where we stand with it. We will start with fresh gas, a battery, some fuel lines, and some vacuum lines. It's also possible that the fuel pumps are bad. They don't like sitting. We can replace the two pumps with one Walbro. That's what we did with The Shark. So, that represents about $200 in parts to see if we can get it going.... Well worth doing.

That is a very cool and rare car. Well worth getting going and passing on to someone else to restore. If you are a member over on mye28 there seems to be a fair bit of interest in e23s. More pics please

I'll look at the traffic on mye28. It'll be a few weeks before we jump on the 745. But I'll get more pictures posted.

I only took a few pictures while the car was on my friend's lift. But here they are...

The coveted Hardy and Beck wheel:

Although it is impossible to read, here is the "S" tag on the diff:

The rear bumper is not as sexy, but everything is in really good condition:

Looks like a complete car, and in decent shape, my vote would be to keep it intact. You might do better than $3500 when you are done. E23s are cool cars, there are not many 745s around.
Top

4 door cars are not my thing, but I think you could make some good money on this car with some time and attention. Get it running and driving as well as you can, clean it up a bunch and stick it on Bringatrailer.com or barnfinds. You may be surprised at the results, especially with how the bidding goes on BaT sometimes. Plus, you know it will go to a good home. We here in SoCal are spoiled by the lack of tin worm action. However, the rest of the country would really appreciate it, as it translates into hours of labor that can be directed elsewhere. Plus the rare wheels and the turbo. PLUS, as Shultz mentioned, the Hardy & Beck story may mean quite a bit to the right crowd. I love a good story with a car that I am buying. I am happy you aren't tearing it apart!
1952 Austin Sheerline Limo RHD
1963 Chrysler 300J 413 Dual Quad
1963 Studebaker Avanti R2 4 spd SC
1964 Jensen CV8 Mk2 383 RHD
1970 AMC Rebel Machine 390 4 speed
1981 BMW Euro 635CSI
1989 Chrysler Conquest 2.6 turbo
2001 Honda Insight 5 spd
Top

Jensen CV8 huh ? - not many of them, not many in the US either.
Top

Well, the work will start tomorrow evening: My hope is to get it running on the cheap. Then, do a thorough check of the brakes, bleed the system, and take a test drive.

OK, well Geoff and I spent a few hours fiddling with the car this evening. I snapped a bunch of pictures which I'll post below. It was at night and outdoors, but you'll see the the car is in decent shape.

More importantly, we changed the oil, drained the old gas, poured in some fresh gas, cleaned up some of the vacuum hoses, put in a good battery and the car cranks over just fine. It did not fire. We squirted in some starting fluid and it started and she fired up and sounded great. So, the problem is fuel.

We put power directly to the in-tank pump. Nothing. Same with the pressure pump. There is continuity through the in-tank pump, meaning the windings are good. So, the pump may just be gummed up from sitting for 8 years in bad gas. So, we are letting the pump sit in the fresh gas and will try again. It may free up, but it may also burn out in the process. Same with the pressure pump.

One thing we could not figure out was the wheel bolts. One bolt on each wheel is different. Maybe it is a stud and nut rather than a bolt. That sure would make mounting the wheel easier. 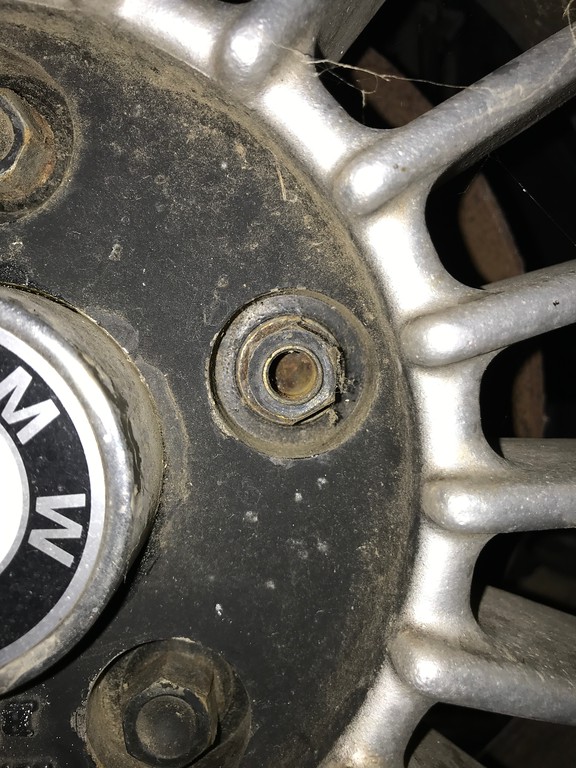 Otherwise, here are some other shots I took this evening: 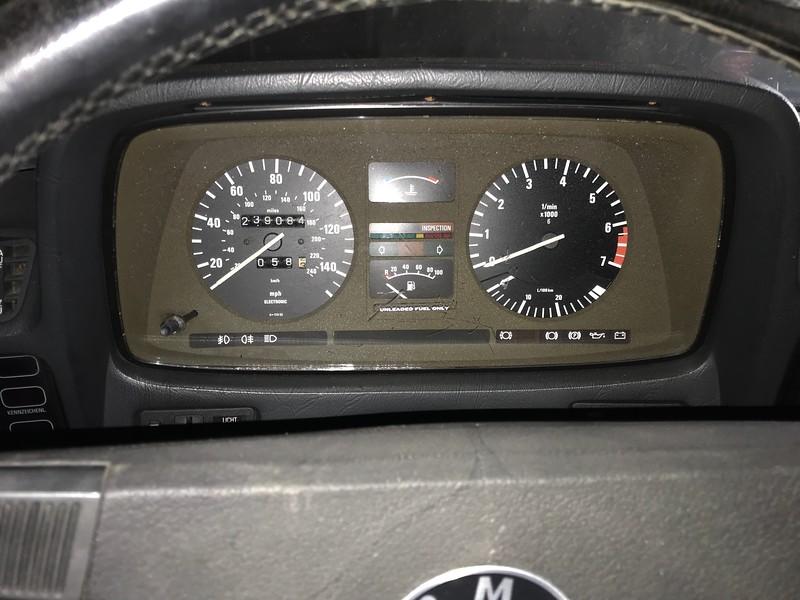 All of the images are in this SmugMug Gallery: https://billybee.smugmug.com/Cars/745-Euro/

The wheel bolts may be locking bolts with the key locks ripped out? Can’t quite see from the photo but BMW locking bolts have a spinning cover secured by a lock to stop a wrench being used. Looks like someone has lost the key and removed the locking parts?
Top

Pod wrote: ↑
Fri Dec 20, 2019 8:48 am
The wheel bolts may be locking bolts with the key locks ripped out? Can’t quite see from the photo but BMW locking bolts have a spinning cover secured by a lock to stop a wrench being used. Looks like someone has lost the key and removed the locking parts?

Here's another angle, and I've zoomed in. It certainly looks like some sort of lock to me; however, I have never seen a BMW lock and the searches I've done show a cylindrical wheel bolt with a removable lock that exposes some internal splines that require a wheel lock key.

I am afraid to hit it with an impact...but that may be our approach. It's 17mm, just like the wheel bolts...

From this picture, it looks to me like you have a short stud and nut at each wheel. The previous owner must have become frustrated aligning the wheels on the center hub each time they remounted the wheels. Shockingly short studs though.
cb
1981 635 Hennarot
1980 635 Polaris (Project)
Top

Pasocb wrote: ↑
Fri Dec 20, 2019 8:45 pm
From this picture, it looks to me like you have a short stud and nut at each wheel. The previous owner must have become frustrated aligning the wheels on the center hub each time they remounted the wheels. Shockingly short studs though.
cb

I thought so, too. I guess we will take a shot and hit it with the impact gun... Maybe we will squirt some penetrating oil on it first.

Sounds good. I will touch base tomorrow morning after I get out from under some of my early commitments.
cb
1981 635 Hennarot
1980 635 Polaris (Project)
Top

Yes, that’s a locking bolt with the lock removed. Just remove it. I’m surprised that you only have one on the car!
Top

There's one at each wheel, actually.

The tank is pretty icky, too, however. There was some black goo on the sock and in the tank.

Here you can see on the transfer pump that there was just a little gas sloshing around in the bottom of the tank for the last 8 years:

And the black goo:

First pictures I've taken of the car in the daylight:

I left my boat un-used for about 3 years and learned the hard way not to do this without storage preparation. Had to replace all injectors, fuel pump and fuel filter plus lines. Very expensive and a lesson well learned.

Return to “The Saloon”

Users browsing this forum: No registered users and 6 guests