From "The Illustrated BMW Buyer's Guide" by Ken Gross, 1984 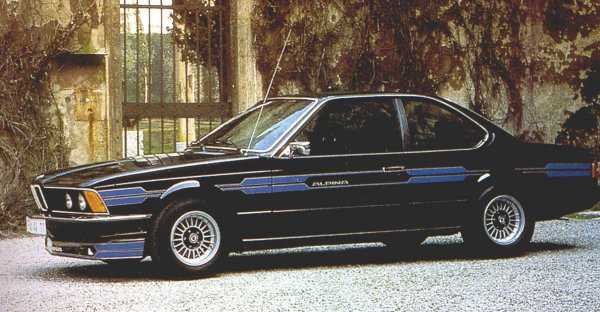 By 1976, when the oil crisis subsided, BMW was waiting with an exciting new coupe design: the new 6-Series. On a 1 mm longer wheelbase, it was longer, lower and wider than its predecessors, setting another new standard for personal luxury that remains a yeardstick today.

In restriction-free Europe, the new 630CS was eq;uipped with a three-liter 185 bhp engine. Carburetion was handled by a big, four-barrel Solex. high rollers, of course, could opt for its sucessor, the 630 in injected form, followed by the 628CSi in 1979 or go for a bigger-bore version, the 633CSi with its 200 bhp 3210cc powerplant. By the time the new CSi made it to America, the car had lost nearly 24 bhp. The three-liter CSi was sold in the US for just one year (1977), and the 3.3 liter engine was the coupe's power plant from 1978 onward.

The results were predictable: The Eurocoupe took only eight seconds to 60mph, another seventeen to 100 and it topped out at 135. The US version was out of breath at 125. Ironically, the strength of the Mark made the cost of the slower US version (at about $25,000) much more expensive than its quicker German cousin.

In 1978, recognizing the performance disparity, Munich's engineers boosted the 6-Series compression ratio and redesigned the combustion chambers for a big lift in torque at lower rpm. As a result, the American car regained some the the maker's original punch.

Originally available only overseas, the 635CSi had a detuned version of the racing engine (two valves/cylinder and sohc versus a four-valve dohc configuration) with a 218 bhp rating. Sporting drivers on the Continent could opt for a five-speed gearbox, too. This combination topped 140 and blew the doors off anything in its class. The factory is also offering a Europe-only M635CSi M88 with four-valve 286 bhp killer motor. This car is probably the ultimate 6-Series example and it comes with fat, fifteen-inch alloys, 220/55 TRX's, big big floating caliper ventilated discs and a new, specially-geared five-speed backed by a limited-slip differential. This car will sixty in 6.4 seconds and will wail all the way to 160! Recently Georg Kacher of Autoweek spent some time in an M-type. While he could drift along at 1300 rpm in fifth (the "double nickel"), I suspect he spent most of his time on the autobahn chasing Ferraris. Standard equipment (for about $34,00 in Germany) is an ABS braking system, along with special wheels, bucket seats and all of BMW's usual electronic gadgetry.

As a postscript, it should be noted that the coupe, like most BMW's, has seen a subtle target-market change over the years. It has lost some if its sporting edge, particularly in the US where it has become an expensive two- and four-seater passenger status symbol. Coach Builders Ltd., Inc. of High Springs, Florida, even markets a full convertible version of the 6-Series for 8,900 over the original sticker. Before you rush for your checkbook, bear in mind that this price is 'dealer list' for the conversion and most buyers can expect to pay a great deal more.

Late in 1984, BMW launched the 635i in the US. Finally, luxury coupe pruchasers didn't have to take a performance back seat. The 182 bhp, 3430cc powerplant has ten percent more torque and 3.45:1 rear end ratio to use the newly found power. Computer-controlled anti-lock (ABS) brakes are standard and a front air dam (like Euro-models) remind others that the new 6-Series is a performer once again.

The 6-Series appeals today to a mature, wealthy individual who knows he or she doesn't have to challenge anyone, and it can quickly turn from boulevardier to purposeful sports coupe. The car speaks eloquently for itself. In germany, the factory racing division and tuning firms like Alpina offer hotter versions (Alpina has a twin-turbo) to transform the coupe into a holy terror in the CSL tradition.