I joined this forum because I am now happily an e24 owner. My first car was an e28 528e, which I still have today. A few weeks ago, my father was in Alabama trying to find some project cars, and he texted me with photos of an e24. I couldn't tell that much about it based on the photos, but I could hardly contain my excitement because I have always wanted an e24 since I saw one in person for the first time after buying my e28. Here are the photos he sent me. 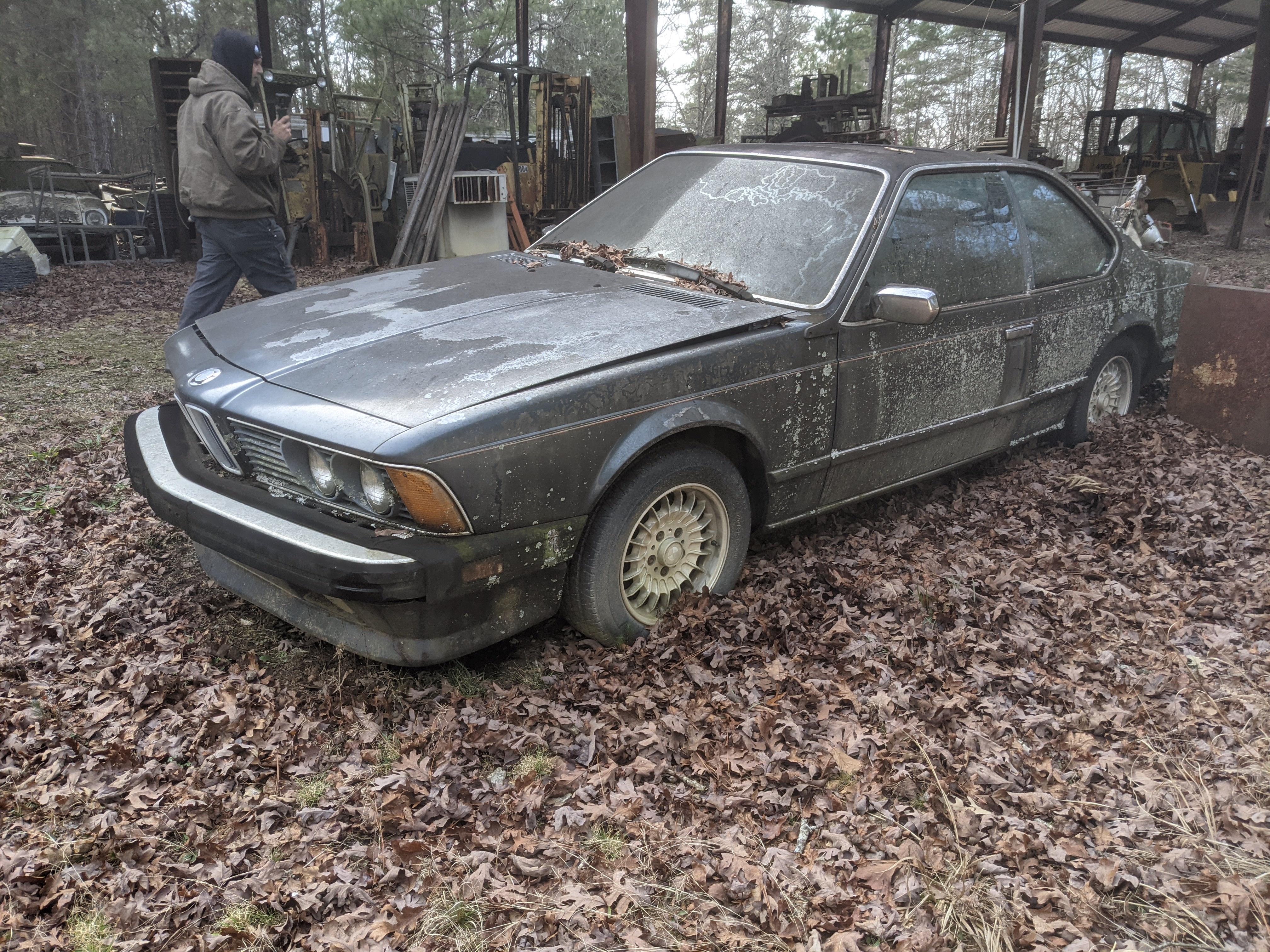 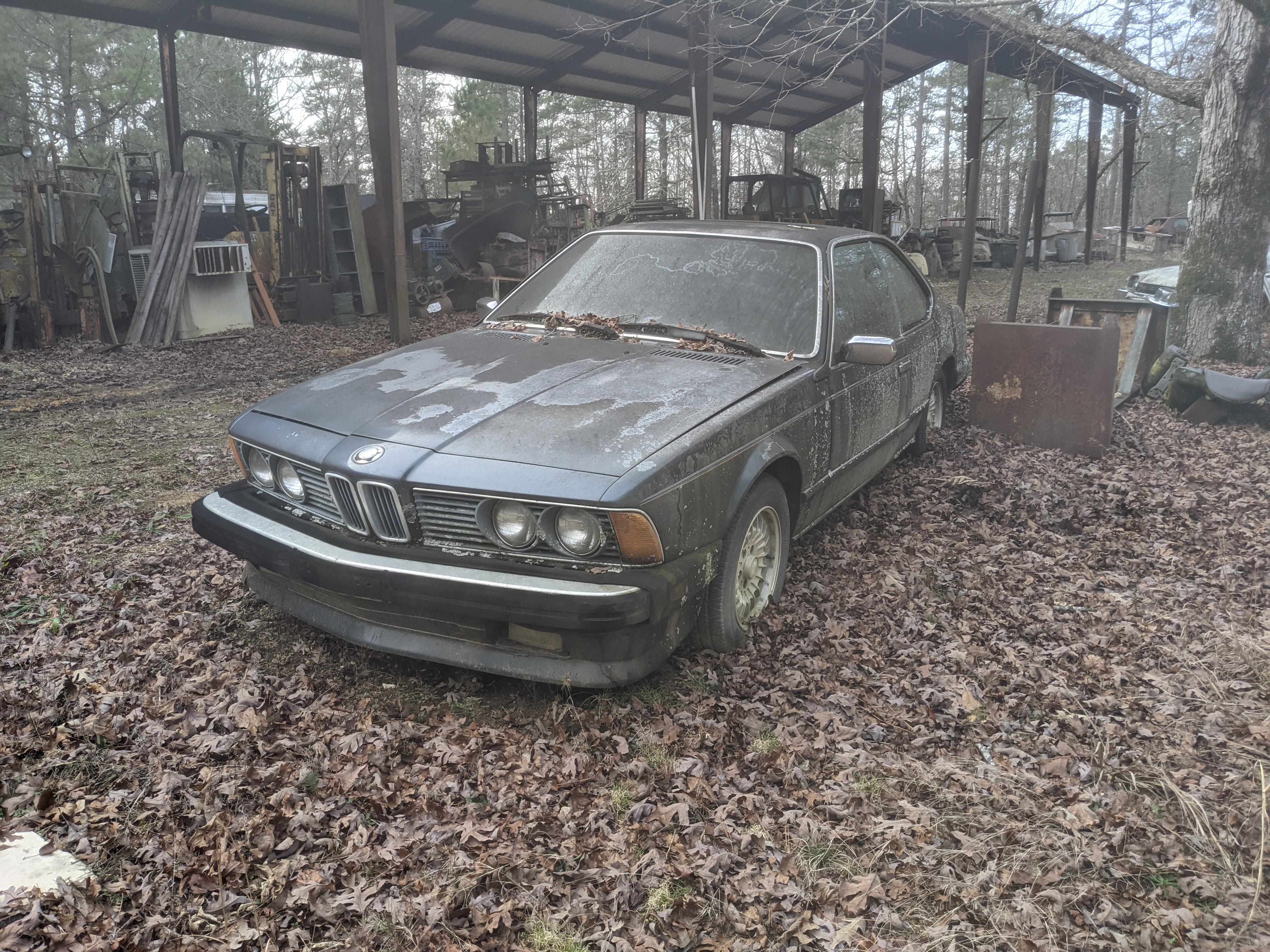 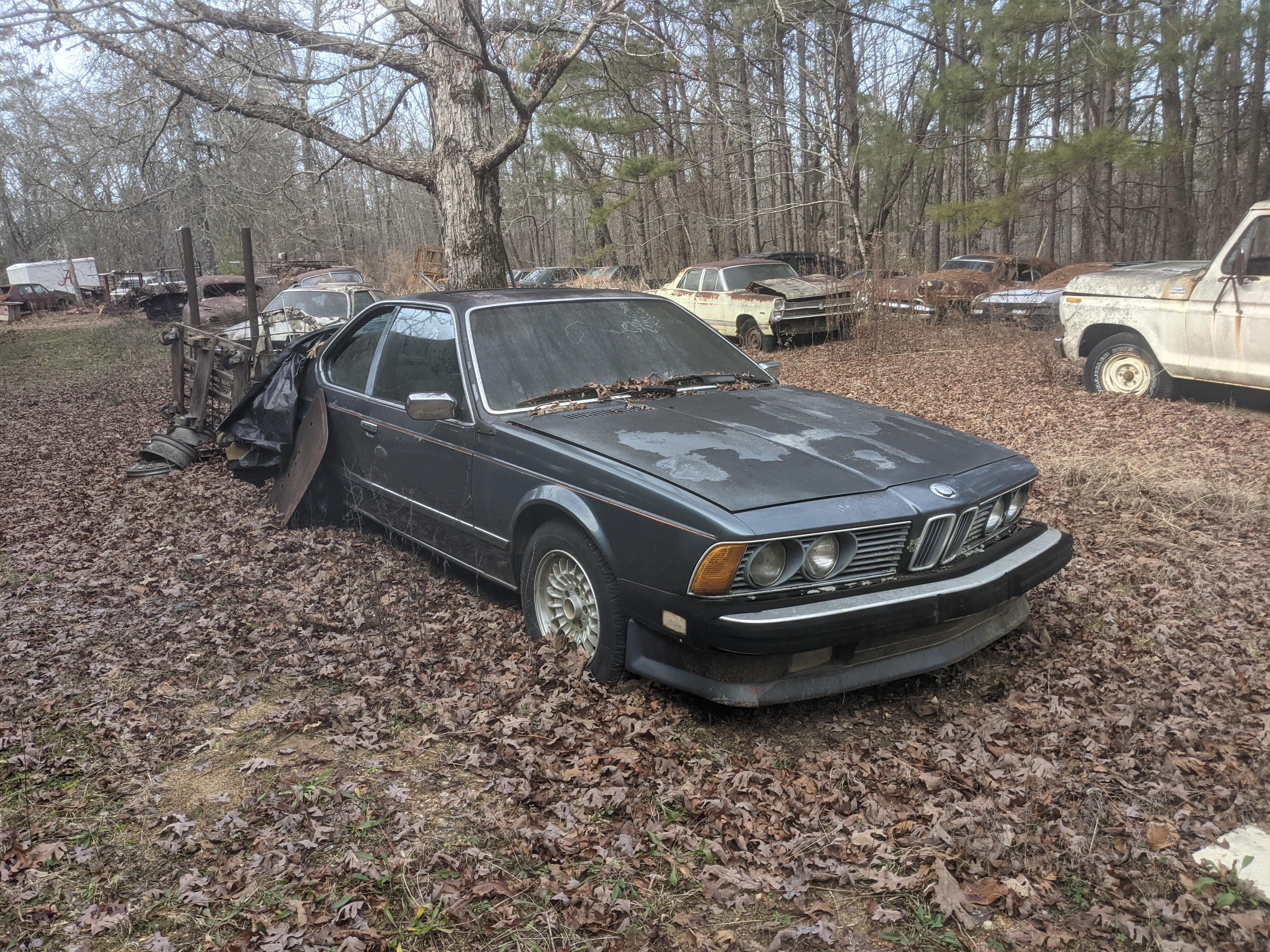 After my dad told me that we were going to be able to go pick it up about a week from then, all I could do is think about the car and contemplate whether or not it would be worth saving. As you can see, the rear passenger window is down, which had me a little bit concerned about how the car looked on the inside. Regardless, last weekend me and my dad headed down to Alabama to pick up the car. Equipped with a phone gimbal, I took a pretty awesome video of all the things I saw there (skip to the end if you just want to see the car).

Upon seeing the car in person, I found that it is an auto 1985 635CSi in arctic blue with a pacific blue interior. Options include TRX wheels\tires, mtech1 steering wheel, sport seats, and seat memory. While the TRXs are no good for anyone that's not trying to do a 100% original restoration, I'm particularly excited about the Mtech wheel and sport seats. My other BMW being an eta, these are things that i have never been able to experience. After pulling the car out of the woods, we took it to a car wash to see what exactly was hiding under the years of grime and growth that had built up on the car. 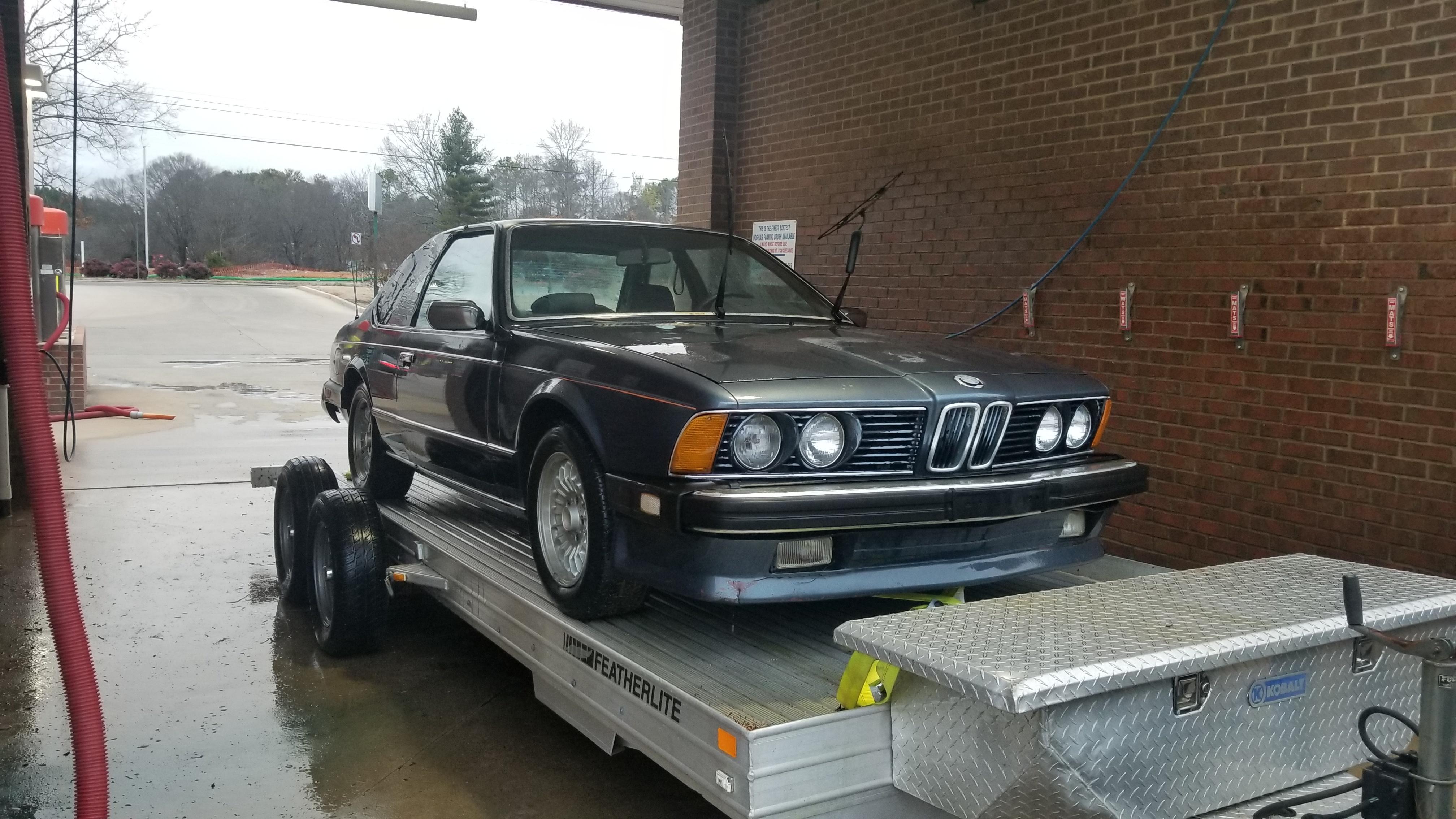 It was still wet in the photo, but after cleaning the car off I was happy to see that underneath all the dirt that had built up on the outside of the car the bodywork seemed very straight and solid. I could only find minor amounts of rust at the end of the rocker panel in front of one of the rear wheels, and next to the license plate mounting holes. While i believe that my hopes were fulfilled, and that this car is most certainly worth saving, it does have its issues.

The interior is quite rough. Sitting outside with one window open has done it no favors, and a lot of the vinyl interior pieces such as the dash, center console, and door panels have quite a bit of cracking. Additionally, the gauge cluster has some weird spores growing inside of it. Lastly, the rear seats and presumably the rear speaker covers have seen better days from the window being open, but i've yet to see anything that has scared me away from this project. I'm hoping I will be able to find all of the interior pieces I need on this forum, and maybe the folks over at Bavarian Restoration may be able to help me with my instrument cluster. Other than that, the car doesn't start due to a lack of fuel supply to the fuel rail, the doors don't shut completely for some reason, the driver door has no lock cylinder, the ignition switch has been changed and I have no keys for the doors, and as stated before, the rear windows do not move. I tried to use the manual override to raise the window that was down, but I fear that the window being open has caused it to seize up completely, as the manual override would not budge the window, which could easily be moved by hand. So first orders of business are getting the window up, getting a key to open up the trunk, and figuring out why the car cranks, has spark, but gets no fuel. I hope you guys will agree with me that despite the clear coat and interior issues this car was worth saving, and you'll follow me in the process :)
Top

Welcome to the insanity!

You just posted a list of problems/things wrong with E24s that are common to just about every E24 you'll find, especially barn/woods finds.

A couple of them are easy fixes. The doors not closing fully is because the "thumb-like" plastic or rubber cover on the door latch is worn out or missing. The lack of fuel most likely is because either the low pressure high flow pump in the tank ("lift pump") isn't working to move fuel to the high pressure low flow external pump, or the external pump is DOA. A couple things to check before diving into changing pumps are the fuses and the fuel pump relay.

By the way, that isn't something growing in the instrument cluster. It's called 'flocking', and it was made that way, weird as it is. Some go to great lengths to either preserve it or duplicate it. Me? Meh, it looks strange, and much of it was gone from the I.C. of the 635 when I got it, so I rubbed the rest of it off. Blasphemy! Lol!

While I didnt know the cluster was flocked, I'm not sure there isnt something growing in there. The car is about 3 hours away from me right now so I can't get a better photo of it, but what I was referring to is a bunch of small yellow dots scattered across the inside of the cluster. Again I could be wrong, and if I am that's an interesting design choice

The car was in Talladega, unfortunately the elderly man who owned it has cancer and wasn't given much longer to live. I'm not sure how my dad and his friend know him, but he has dozens, if not, a hundred cars out in his backyard. The way we saw it is they would be put to much better use if we pull out some of the ones that are worthwhile, because who knows what might happen after he passes. Many of them are likely to be crushed I'd say.
Top

It is flocking, I posted this back in June.

Oh okay I see now. Good to know I dont have to immediately worry about cleaning out the gauge cluster and I can push it back with the rest of the "aesthetic" issues

In the second phoyo, right in fromt of the pickup tuck looks like a slant nose sports car; almost an M1. No way...
85 635CSi Bronzit
Top

Nope, as much as I wish I was that lucky, that's a 1985 dodge conquest turbo technica. Still a cool car IMO, but obviously I couldnt resist the e24. My dad bought it because he didn't want much for it, but I believe he's just going to give it to his friend in exchange for air suspension work on the 73 Benz 280c he picked up.
Top

Hey guys, a little bit of an update!

After what feels like forever my e24 is finally at least in the same state as me. Unfortunately it will have to stay at my dad's house, about an hour away from where I am living now because I already pay a healthy sum monthly to keep my e28 up here. I'm an employed college student, so I need to save money where I can right now, but hopefully graduating this year will lead to more preferable arrangements 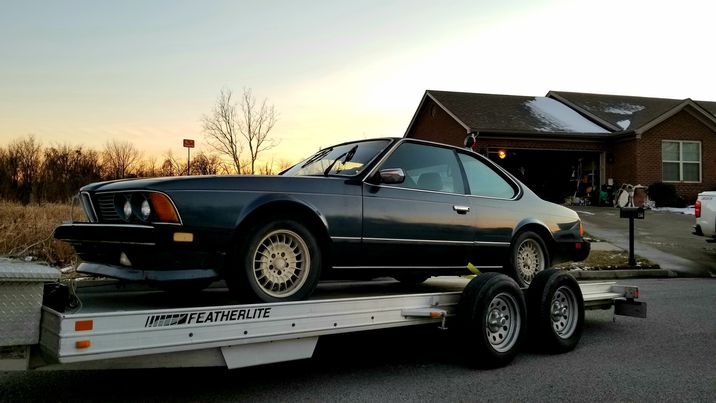 I still need to order a fuel relay and pump, as well as take the glove box lock out so I can (hopefully) get a key cut and get the trunk open. I would like to do a walbro 255lph conversion. Don't see much use in paying more for a lift pump when, if i'm unlucky, pump #2 could be kaput as well. Waiting on my tax return to give me some financial relief before that happens, I will keep you guys updated.

Seeing the car in person again, it really set in how much of a project it will be to get this car to a point where it at least doesn't look like it was pulled out of the woods. I guess that's the fun in it

hornhospital wrote: ↑
Fri Feb 05, 2021 6:09 am
Honestly the appearance of it is miles ahead of many "woods/barn" find cars. The paint actually looks good.

Yeah, the roof and trunk have basically no clear coat, and the hood is getting there, but that's nothing that can't be fixed. My main concern is the rubber seals and cracked/warped interior pieces. But again, it's just a matter of finding what needs to be replaced and swapping out the bad parts.
Top

and thus is the first clue given you've been stricken with the disease known as 'old car restittis:" something all of us suffer from...

Seriously, it looks like you have a good basic project car. Mine was not as bad, know I'm wrestling with loose sunroof liner and ABS/cruise control issues.

Thank you! I'm beyond excited to get started.
Top

Congrats on your acquisition. What a great video, I had to watch it twice. Those Datsuns!! Were they selling all those cars? Good luck with the 635, you're in the right place. 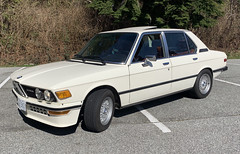 zinnocoupe wrote: ↑
Wed Feb 10, 2021 6:54 am
Congrats on your acquisition. What a great video, I had to watch it twice. Those Datsuns!! Were they selling all those cars? Good luck with the 635, you're in the right place.

Thank you! Based on my understanding, the goal was to get a lot of them sold, yes. I would have loved to have saved one of those datsuns but I already have enough on my plate.
Top

Not a huge update by any means, but me and my dad were able to get the car running. I neglected to get any pictures of the ridiculous setup we had going, we rigged a random external fuel pump we bought onto the fuel rail with the return going to a cat litter jug. Getting the car to run revealed many issues, such as fluid leaks and tears in the intake boot. Additionally, the power steering reservoir is bone dry, and I fear that this may mark the beginning of a painful battle with the hydro boost system, but I'm optimistic I'll figure it out one way or another. I will buy all of the parts I need to fix the known issues once funds allow it, and then hopefully I will be able to bring you guys a better update as well as diagnose more issues.

My dad suggested going full race car mode with it if it puts up too much of a fight, but believe it or not I'm a bit more of a conservationist than he is, so I will try to fix as many of the issues as I can

The interior is the most of my worries. Windows that don't move are no fun, but that's nothing compared to the price of sending your dashboard off to get it fixed "the right way"

Users browsing this forum: No registered users and 12 guests