I'm struggling with removing this nut, how do you guys remove it?
I do not have impact tools available, just a wrench and 30mm long socket.

I read in the Bentley service manual that I have to hold the flange while loosening, but how? There is not mutch to hold down to.

I would insert a screw driver through one of the ears and wedge it against the
edge of the casting.
Top

Can that be done without risk of damaging the ear of the flange or the casting?
Paul

Took the lock plate out, blocked the flange with 2 bolts...
Tight!! Not easy to loose!
Stopped for now, was not able to get it loose.

Impact wrench makes it so much easier. The cheaper battery units are more than capable so you don’t need an air compressor. Good luck

Try giving it a pull to the to the tight side. Sometimes that will break a bolt, nut or screw loose. You might also put your socket on and give the handle a hard wrap with a hammer and that could very well break it loose
81 Euro 635 M90 with motronic. Currently under a complete nut and bolt restoration. Pictures at
flickr.com/photos/bertsphotos.
Top

Thanks guys, tried it all but without luck.
Will get me a battery impact gun.
What would you recommend as minimum torque?
Paul

Good idea with the bolts, either way I think you would feel the tension
on the casting and stop applying pressure. The impact is the safer way of removing.
Top

Thanks, was thinking of a torque around 500nm too, which is close to the 400 lb.ft you mentioned.
The assembly torque isn't that high it is 120nm (89 ft.ft) for the 2nd stage of tightening.
Paul

Hi, thanks for your reaction. I will give it another try.

If it won't I will rent a powerful 600nm impact gun.
Paul

Tried first with a 680Nm (500 ft-lb) without luck.
Took off the flange and pried both seals out.

The small transmission selector shaft seal seemed impossible at first but when I smashed it in on one side, it rotated a bit in the seal bore, after that it was out in a minute.

I used a grinded screw driver to pull it out, which was helpful.


Took out the output shaft seal without issues, but after it was out I noticed a scratch in the housing. Seems like someone was in here before me and scratched the bore

. The scratch is visible on the photo and it is also visible on the seal I took out. I am not sure if it leaked oil through the scratch, but I assume it did. It did leak before, that's the reason I changed the seals.
I do not want to just put in a new seal as the person before me did. I want to seal the gap.
Was thinking of using sealant, I have Curil K2 available. Not sure though if it will seal the scratch good enough. I have read about repairing it with JB Weld. Not sure though if that will work with the transmission still in the car. Someone has a good idea to fix this?

Thanks for your reply.
Perhaps it isn't visible on the photo but it is in fact a scratch.

It is not a drilled hole with thread in it I'm afraid.
Paul

Contacted J-B Weld and they advised this epoxy.
Anyone have experience with it with similar repairs? 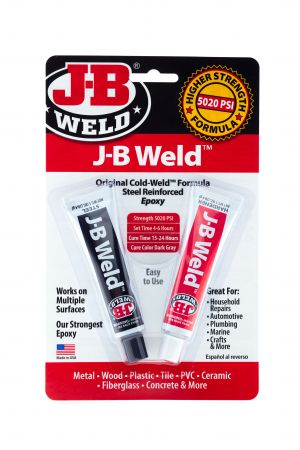 It is not a drilled hole with thread in it I'm afraid.

That really doesn't look anything like "just a scratch". And there's an indentation in the rubber seal too. Could it be that someone has previously been somewhat exuberant in trying to remove the seal at an earlier time?
Phil
__________________________

My belief is the scratch on the seal is passing oil and then through she slot on the case a good seal should hold but as has been suggested fill the groove in the case with JB weld To do it right and proper pull that housing and have it welded and machined. But that would be last chance if the JB Weld didn't do the deed
81 Euro 635 M90 with motronic. Currently under a complete nut and bolt restoration. Pictures at
flickr.com/photos/bertsphotos.
Top

I've tried the JB weld 2 part mix before and is quite liquid - takes a while to cure and won't hang up in that location.

I would think a putty would be more suitable; just did a quick search so something like this

plip1953 wrote: ↑
Mon May 04, 2020 6:35 pm
That really doesn't look anything like "just a scratch". And there's an indentation in the rubber seal too. Could it be that someone has previously been somewhat exuberant in trying to remove the seal at an earlier time?

I'm afraid so Phil, looks like they tried to pry it out with a sharp object, prying between the seal and the bore. The spot you see on the seal is where it touches the groove. You see that the rest of the seal is pressed in except for that spot. I'm quite sure it must have leaked.


Guys, thanks for the tip with the putty style JB Weld, will get get instead of the liquid version. Thanks!

Oh by the way, would perhaps a combination be best? Seal the deepest part of the scratch first with the liquid form and the use the putty to close the gap?
Paul

You are over engineering this. Just use the putty and sand it down to match the contours Remember "Kiss, keep it simple stupid"
81 Euro 635 M90 with motronic. Currently under a complete nut and bolt restoration. Pictures at
flickr.com/photos/bertsphotos.
Top

Pretty sure you're setting a new definition of "scratch". I've never seen a scratch cast a shadow! That said it is hard to tell if the corresponding area on the seal is concave or convex. It sure seems like it is concave which would argue it having housed a pin or grub screw as was previously posited.
It also seems that gouge was formed from the inside out which is also curious.

I would set the new seal in with jb weld or some other sealer like curil. Let the jb weld fill and then cure in the gap. Just don’t use too much that you have severe overflow into the trans

Users browsing this forum: No registered users and 19 guests